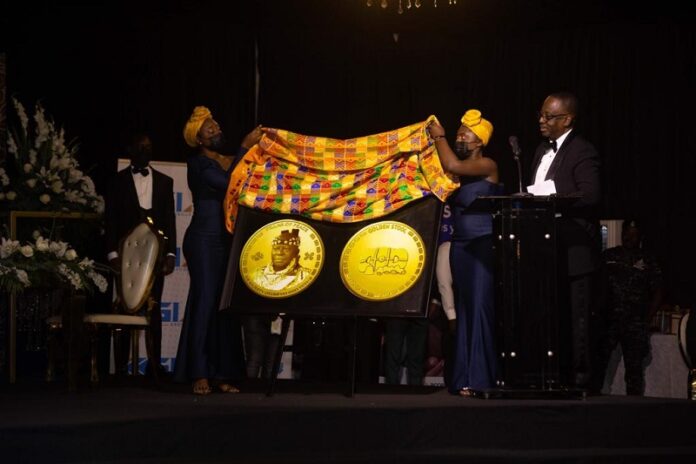 KGL Group, a world-class brand and one of the leading private sector companies in Africa has acquired the first-ever 24- carat Commemorative Gold Coin for 1 million Ghana cedis in support of the establishment of a cultural resource centre that will employ the latest technologies and IT platforms to promote activities related to traditional and customary conflict resolution in Ghana.

At the formal Celebration of Otumfuo’s momentous achievements as ruler of Asanteman, Executive Chairman of KGL Group, Mr. Alex Dadey, who also serves as Chairperson of the Board of GIPC expressed his profound appreciation for the remarkable achievements chalked by Otumfuo Osei Tutu II.

He stated, “It is entirely befitting, that given the history and the context of Ghana, that today, on December 12, 2021, the 16th Asantehene, Otumfuo Osei Tutu II, here in the grounds of the Palace of Manhyia, in the heart of Asanteman, presents a value-added Commemorative Gold Coin to the world. The excellent Concept to create this Commemorative Gold Coin is by royal assent, from Ghana. The gold in the coin was Mined in Ghana. It was Refined in Ghana and produced in Ghana.”

In launching the commemorative Gold Coins freshly minted with the Golden Stool on one side and His Majesty Otumfuo Osei Tutu II on the other, Mr. Alex Dadey pledged to significantly support Asanteman in its development, as “the Ashanti region is the second largest market for our operations as KGL Group and such deserves a great deal of our attention”.

In declaring the Gold Coin duly launched, he remarked; “Distinguished Guests, Ladies and Gentlemen, hundreds of years from today into the future, let these coins being launched today become a collector’s item and an everlasting touchstone marking the remarkable achievement of peacemaking that the onetime 16th Asantehene of the Great Asante Kingdom of Ghana provided his people, and indeed, his country.

KGL Group as part of its strategic objectives for Tourism and Cultural Development is set to fully partner Asanteman and other Traditional Authorities in Ghana.

The doors of KGL Group are open to every Traditional Authority that aims at developing its cultural heritage, customs, and traditions for the purpose of promoting tourism, ensuring peace, stability and conflict resolution in their respective jurisdictions.

KGL Group since its establishment has significantly contributed to the revenue mobilization efforts of government, supported social intervention programs, charity organizations and sports development in the country. Together with its subsidiaries, KGL Group has been at the forefront in supporting the Government of Ghana to successfully implement the flagship policy of digitalization.