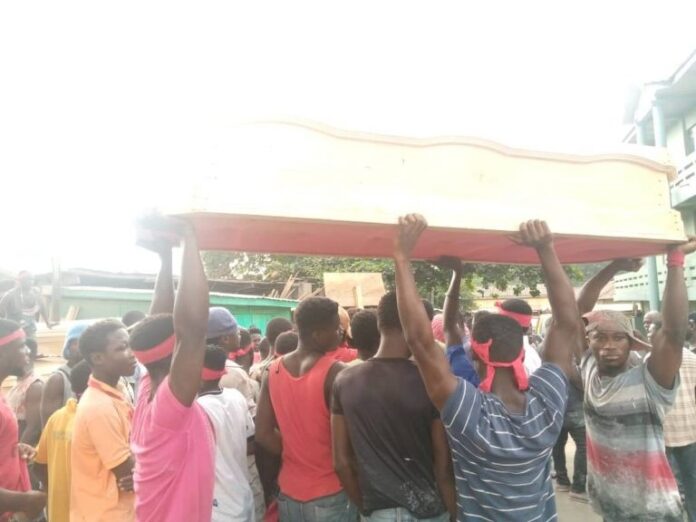 Hundreds of Coffin Producers in the Kumasi Metropolis are incensed after alleging that the Metropolitan Assembly asked them to relocate from their current location at Asafo to pave way for the construction of stores and other public facilities by a private developer.

According to them, the step was taken without any prior notice thereby leaving several of them in a state of shock and confusion.

They say the most disappointing part is that the city authorities only asked them to leave without making any arrangement to move them to a different location to ply their trade.

They warn that a huge demonstration will be staged in the Ashanti Region capital if the assembly authorities do not respond to their plights as a matter of urgency.

The casket producers clad in red attires and bands over their heads staged a small protest to preliminary send a signal to authorities about their displeasure.

Speaking to Ultimate News’ Bayaga Fatawu in an interview a member of the group, Evans Effah Poku explains that it was inappropriate on the part of the Assembly to evacuate them without due process.

He says as they were undertaking their businesses some persons including the Asem Chief and the Assemblymember of the area suddenly came and served them notice to leave the place by 18th December 2021 and that if they refused force will be applied to vacate them.

He notes “we were only undertaking our businesses this morning and to our surprise, Asem Chief together with the Assemblymember of the area came, telling us to vacate this place by 18th of December, 2021, and that if we refuse they will come and force us to leave.”

Effah Poku insists that the place is the only selling space available for them therefore if they are evacuated from there they may risk losing their businesses as everywhere in the Metropolis is congested.

They are therefore calling on the Kumasi Metropolitan Assembly to either extend the date or get them a different place to undertake their businesses.