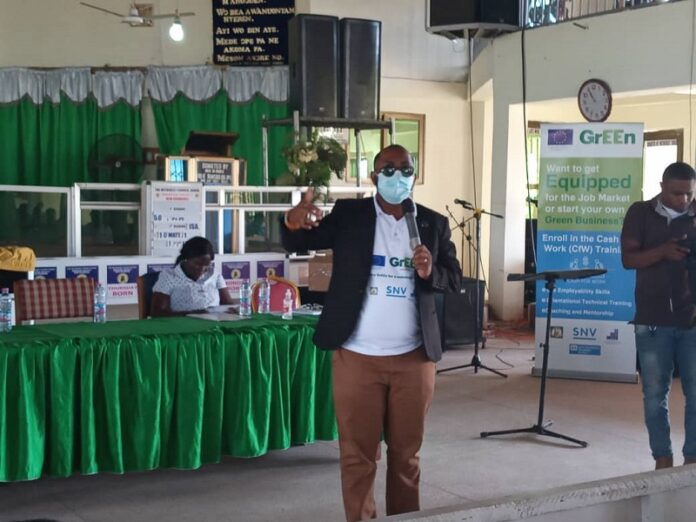 The queen mother of Drobonso in the Sekyere Affram plains District of the Ashanti region Obaapanin Adu Akosua Fofie has warned that the quest to have issues of gender-based violence settled in courts cannot materialize if grievance settlement processes of the Social Welfare Departments remain frustrating.

According to the Drobonso Obaapanin, cases she has referred to the Social Welfare Department at the Assembly have always faced sluggish, cumbersome and bureaucratic processes eroding her confidence in the state to deal with Gender based violence.

“Anytime I have asked some of the women who bring issues of violence and unfair treatment to go to Mr. Obeng at the social welfare department, they have come complaining of being told to go home and return on so many occasions till they give up. Now the women themselves will tell people not to bother going to the Social Welfare Department when I ask them,” she lamented.

She made her point succinctly during a day’s sensitization organized by the Boosting Enterprise and Employment Opportunities (GrEEn) Project for some three hundred women in the Drobonso Community.

Empathizing with the queen mothers, the Team Lead, SOS- GrEEn Project, Vincent Ohene-Ntow attributed the trend to the legal processes that the Social Welfare Department has to engage to seek justice for victims.

He advised, “We need to encourage them to understand that it is a process they have to go through and once they are determined, they should be assured that even though the wheels of justice grinds slowly, eventually they will get justice.”

He further cautioned, “If you are violated against and you refuse to report for the necessary action to be taken, you will continue to suffer physically, emotionally, sexually. But once you commit yourself to the processes and the law takes its course, it serves as a deterrent for the perpetrator and other persons in the community.”

Social Advocate Fidelia Ankoma pointed out that the fight to reduce Gender-Based Violence in Ghanaian communities has become difficult because of the deep seated gender socialization which orients men to feel superior to women.

The Sekyere Affram Plains District was targeted for the streak of advocacies drafted in the aftermath of the International Day for the elimination of violence against women commemorated by United Nations Member States annually to draw attention to the subject and to push governments and relevant institutions to offer better protection for women across the world.

The district is one of the six assemblies in the Ashanti region receiving funding from the European Union Emergency Trust Fund for Africa (EUTF), The United Nations Capital Development Fund, the Embassy of the Kingdom of the Netherlands, SNV under the GrEEn) Project.