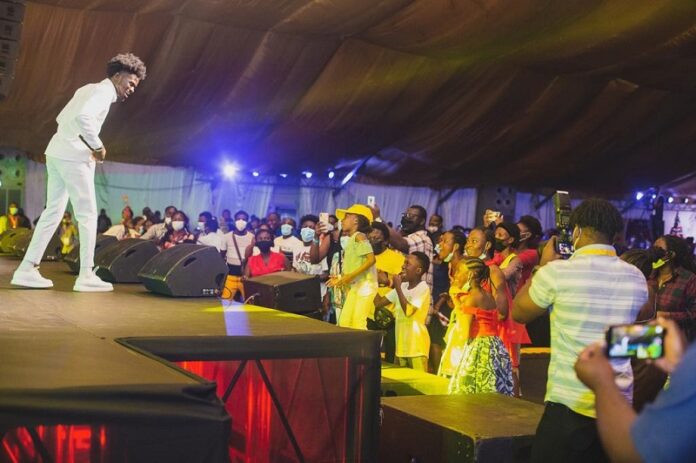 Samini was there. Stonebwoy was on the bill. Kuami Eugene was on stage. The audience expected a great show and the A-list artistes delivered it with immense enthusiasm!

The event was the MTN Ghana 25th Anniversary Nine Lessons and Carols event held at the Grand Arena, Accra, on Friday, December 10. Stonebwoy, Samini and Kuami Eugene took turns to dole out some thrilling performances to the audiences at the venue and on MTN digital platforms.

Before they hit the stage, Soul and highlife singer, Abiana opened the three-hour sizzling show, clad in a gleaming dark green puffy-sleeved long dress, sporting a cropped hairdo that gave her a smart look that complemented her energetic performance.

With a Christmas-themed song, “Mary did you know?” a Ga love song and a couple of other tunes, Abiana touched the audience in an exciting way that earned her some applause at the end of her performance.

MTN Hitmaker Season 9 winner, Adepa Zela was the next artiste on the stage. Looking sharp in her brown sleeveless top and off-white skirt, perfected with sneakers, commonly known as ‘camboo’, she hit the audience with some popular Christmas songs – “Joy to the World” and “Pa Ram Pa Pam Pam”. She topped off her performance with some Akan songs, “Te3 Abofo 3nne” and “Nyame ye,” which she did with a touch of rap.

The MTN Viva Voices Choir followed with a number of Carols in English and Akan. Members of the choir entertained the audience with choreographed dance moves as the conductor stole the show with his unique dance steps and conducting style.

The musical side of the show got heated up when the leader of the BHIM Nation, Stonebwoy a.k.a 1 GAD stormed the stage in a sharp black suit over a white shirt, sporting dreadlocks with the sides shaved. Song after song, he got the audience up on their feet as he got down from the stage and joined them on the floor to sing, dance and take selfies with his fans.

Samini, the live music maestro and evergreen reggae-dancehall performer, who said he had just recovered from a bout of malaria, took over the microphone and cooled down the atmosphere in the arena with some of his popular tunes done in a rub-a-dub style. He increased the tempo when he ‘dropped’ his popular sprightly song, “Where my baby dey” and left the audience yearning for more.

In a message, which was delivered in the form of a song, Samini urged Ghanaians not to drink and drive in order to avoid accidents during the yuletide. He also cautioned the people to protect themselves against malaria.

The last performer among the galaxy of stars on the bill, Kuami Eugene, stepped on stage in all-white apparel and switched the show into a praise and worship session with a back-to-back medley of well-known gospel songs. He ended his performance with a couple of hits from his repertoire.

The MC for the night, comedian Foster Romanus was in his element, firing one joke after the other to the exhilaration of the audience. He also gave out special MTN goodies in the Fastest Fingers Contest, in which the member of the audience who was the first to type in a given code got free airtime from MTN.

The CEO, Mr. Selorm Adadevoh in a short address said 2021 is a year of reckoning, coming off the back of 2020, which challenged “all of us in different ways”. “The event is to celebrate and also say thank you to Ghanaians for your support through the years”.

According to the CEO, 2021 is special because it marks 25 years of MTN operations in Ghana and the event was also meant to thank God for His blessings.

MTN has, in the last few weeks, held a number of musical events to mark its 25th anniversary. The shows included the MTN Hitmaker All Stars Concert, which featured Kuami Eugene, KiDI and a host of past winners of the popular music talent hunt show, Hitmaker.

Another show was the MTN Stands in Worship gospel show with    Christy, Joe Mettle, Celestine Donkor and others.

The popular MTN Music Festival was also held last Friday to coincide with the National Farmers Day celebration which was observed on Friday, December 3. Artistes on that bill were highlife greats Kwabena, Kaakyire Kwame Appiah, George Jahraa and Dada KD.