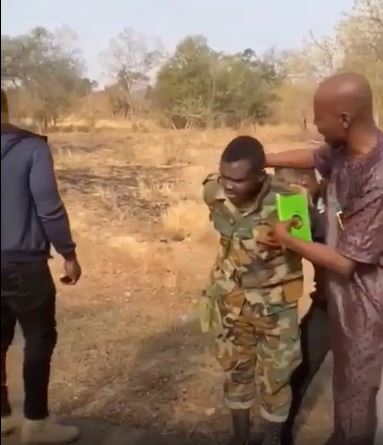 The Ghana Armed Forces has denied reports of a soldier being a member of the car-snatching syndicate that has been arrested in Buipe in the Savannah Region.

There have been several videos and pictures on various social media platforms of the arrest of the syndicate that attacked and snatched a car from a victim at Tamale.

In the said videos and pictures, one of the suspects is seen wearing a military camouflage uniform and has been described variously as a soldier of the Ghana Armed Forces.

But the GAF in a statement signed by Commander Andy La-Anyane, Acting Director of Public Relations, said “we wish to state categorically that the suspect is not a soldier of the Ghana Armed Forces.”

The statement noted that the Armed Forces is worried about the rising spate of impersonation by civilians, either wearing military uniforms or posting fake pictures of themselves as military officers to defraud unsuspecting Ghanaians.

The GAF advised the public to be circumspect in dealing with persons who pose as military personnel, and when in doubt contact the Directorate of Public Relations on 0544338030.