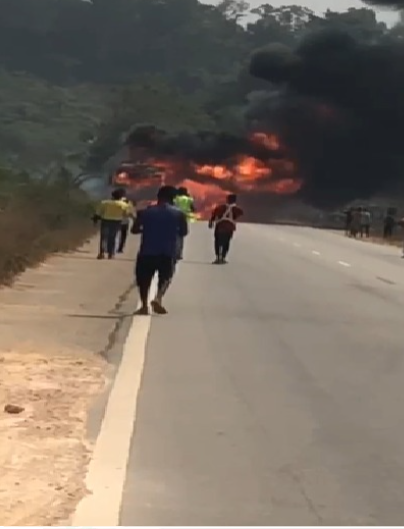 It has been established that the Maxam company vehicle carrying explosives that exploded Thursday claiming 17 lives and leaving scores injured, did not have any escort vehicle ahead of it to forewarn other approaching road users as per best practices.

The Deputy Director of the National Disaster Management Organization (NADMO) at Prestea Huni Valley in Bogoso, Louis Afful made the disclosure in an interview with host Kwame Malcom on Takoradi-based Radio 360′ s flagship morning programme Y3nsom.

He wondered how come such infractions escaped unnoticed by the Police and other duty bearers.

Louis Afful also stated that most mining companies have taken things for granted instead of spending on safety measures in their operations?

It has been a day that will go down as a Black Thursday when disaster struck after a vehicle carrying explosives belonging to Maxam company exploded at Apiati at Bogoso leaving a total of seventeen (17) confirmed dead, and fifty-nine (59) injured persons who have been rescued. This brings to seventy-six (76) the number of persons known, so far, to have been affected by the tragedy.

Out of the fifty-nine (59) injured persons, forty-two (42) are receiving treatment, and some are in critical condition.