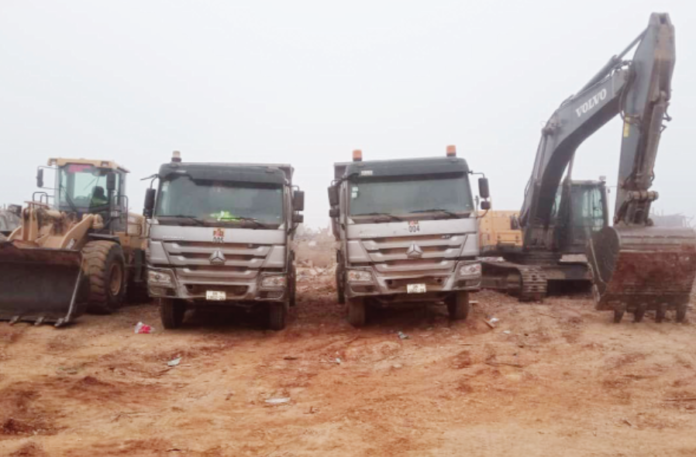 Bulldozers and other earthmoving machines have started demolishing damaged buildings and property and clearing debris at Appiatse to pave the way for the reconstruction of the city.

The exercise, which began exactly a week after a deadly disaster hit the community, is to make way for officials of the State Housing Company (SHC) and the municipal assembly to start taking a closer look at the field to guide them in planning and demarcation ahead of the reconstruction.

Prior to the demolition, the SHC carried out an assessment of the damage to residential structures after the deadly explosion at Appiatse, a small community near Bogoso in the Western Region.

The assessment provided the company with adequate information to plan the rebuilding exercise, which the government has instructed it to carry out.

The Daily Graphic team which witnessed the exercise saw that buildings that had their roofs ripped off in the blast but whose structures were still standing were pulled down and the foundations excavated.

The clearing exercise started from the main entrance of the community from the Bogoso direction.

The debris was initially heaped before pay-loaders tipped it into trucks.

Before the exercise, some community members, who could identify the exact locations of their homes, descended on the village at dawn to salvage some belongings.

As of noon, the team realised that almost half of the community had been cleared in the exercise which started early in the morning.

While the demolition and field clearing was progressing last Thursday, the members of the Steering Committee of the Appiatse Support Fund, who were at the Jubilee House in Accra to introduce themselves to the President, gave the assurance that the country would take advantage of the disaster at Appiatse to rebuild it into a green city.

“This is an opportunity for us to do a green city, making sure that we use renewable resources to build the city and get the people to understand that things have changed so much and the world is also suffering from our misuse of the world’s natural resources,” the Chairperson of the committee, Rev. Dr Joyce Aryee, assured President Nana Addo Dankwa Akufo-Addo.

The clearing also follows the conduct of preliminary investigations into the cause of the disaster which resulted from the explosion of 10 tonnes of dynamites being transported to a mining site.

The investigations include those conducted by the Ghana National Fire Service, an environmental impact assessment by the Environmental Protection Agency (EPA) and various investigators from the police, the National Disaster Management Organisation (NADMO) and the Inspectorate Unit of the Minerals Commission.

The EPA after its assessment has certified that the site is safe for reconstruction.

The demolition and clearing also attracted some residents who were happy that the rebuilding promised by the government had taken off in earnest and was not a nine days’ wonder.

Some of the residents said they had seen several promises of projects in the past which were either delayed or not touched at all and were therefore happy with the swift approach and the support from the donors as well as the personal commitment of President Akufo-Addo.

The Municipal Chief Executive of Prestea Huni-Valley, Dr Isaac Dasmani, told the Daily Graphic that there was no time to waste and that the government was committed to getting the people back to normal life.

“I must say that we are determined to ensure that before the close of day Sunday, the entire debris would have been moved from the site. The planning and the housing departments will start working on the designs,” he said.

The municipal assembly and the SHC team working on the project, Dr Dasmani said, would carry out mapping to see the number of structures that could be built.

“From all indications and the kind of structures we want to erect to replace the destroyed community, we would be needing extension of the existing land space to create more space for the community,” he said.

Dr Dasmani said even though the structures that went down were old, “we are going to build a more modern and better community. In the new settlement, we are looking at a community with streets and other social infrastructure to make it better for them”.

Some of the new facilities include a health facility, a school from kindergarten to junior high school and a police station.

“We had GNPC Foundation, which has also joined to provide a school for us and we are working with them to ensure that we enhance the settlement.

“Let me say that what we are planning to build is not just a community, but a modern community that will tell the story of the people and the unfortunate incident that razed down the community,” Dr Dasmani said.

He said the municipal assembly and other members of the team were not going to impose the structure on the people.

“We are going to ensure that the design for the new settlement is displayed for the people to make suggestions,” he stated, adding that it was to make the new community model accepted by all.

“It will be devoid of any acrimony; we will ensure everybody’s need is taken care of,” Dr Dasmani said.

The explosion occurred at Appiatse, which is between Bogoso and Bawdie, after an earlier accident involving a motorcycle, Pragya and other vehicles resulted in the motorbike sliding under the truck carrying the explosives.

According to a police situational report, the motorcycle, in the process, caught fire and ignited the truck, which detonated the explosives estimated at about 10 tonnes, resulting in the blast.

The driver and dozens who sustained injuries were rushed to various hospitals. The thunderous explosion caused extensive damage after levelling residential buildings.

Most of the survivors were those who were far from the scene, on farms and on other errands.

The police added that vehicles plying the road were damaged, while many passengers and inhabitants sustained varying degrees of injury.