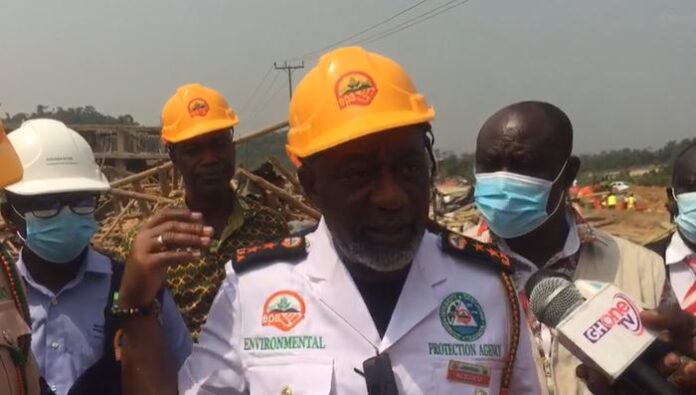 The Executive Director of the Environmental Protection Authority, Dr. Henry Kwabena Kokofu has called on Ghanaians to be advised by the devastation at Apiate and eschew all war-mongering sentiments.

The town of Apiate near Bogoso in the Prestea Huni Valley municipality was on Thursday, January 20, 2022, totally wrecked in a space of less than 30 minutes after a motorcycle reportedly collided with a vehicle carrying explosives causing a huge explosion.

Though it was caused by accident, its effect has been detrimental, claiming lives and injuring several others.

Premising on this incident, Dr. Kokofu during a visit to the town, made a clarion call on all Ghanaians to eschew all tendencies towards violence in all forms.

“It’s important to look back here, you see the complete run down, this is not something that was consciously done it was occasioned by the blast. So those who are calling for war, what you just witnessed is called dirty bomb. And if you have the refined bomb, then we know what it can do, so we must all desist from instigating and inciting violence in all forms, this is violence that was not called for, violence that can be said to be accidental. And this is very devastating,” he cautioned.

Though Ghana has not experienced any insurgencies in spite of a couple in the West African sub-region, there has been some attempts, of which some persons fingered in an alleged coup plotting are facing trial in court.