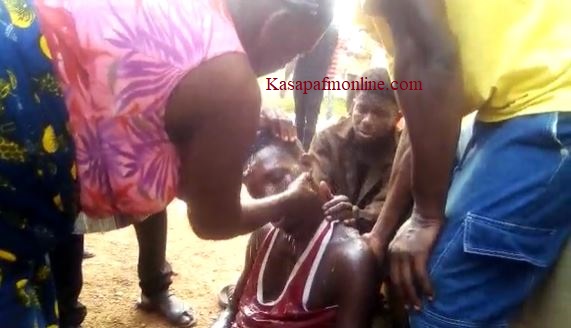 A 42-year-old palm wine tapper has collapsed and died at Ekumfi Gyinankoma in the Ekumfi District of the Central Region after allegedly trying to butcher a banku seller at her house.

Speaking in an interview with EIB Network Central Regional Correspondent Yaw Boagyan, the woman whom the deceased allegedly attacked, Efua Grace said the deceased came to her house with a sharpened cutlass threatening to hack her to death over a mobile phone which does not belong to him.

In the process of exhanging words, the suspect suddenly collapsed compelling residents to pour water on him to revive him but when that failed, he was rushed to Ekumfi Akroful Clinic and later referred to Ajumako Government hospital but upon arrival he was pronounced dead.

The body of the deceased has been deposited at Etuafua Mortuary at Ajumako Mando while the case has been reported at the Police for investigation.