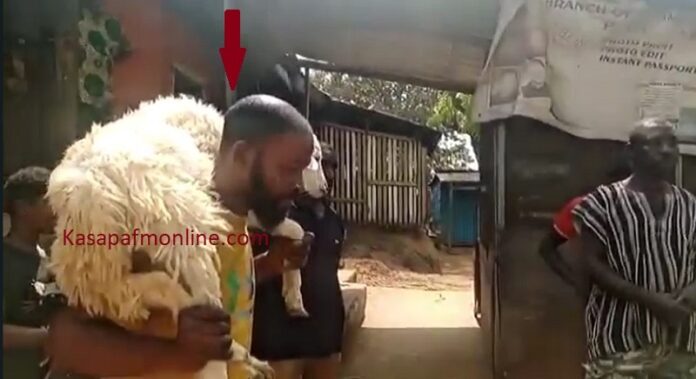 A 35 year old man whose name was only identified as Issaka has allegedly impregnated his 17 years old stepdaughter, and also slept with his two daughters at Kwahu Nsabaa in the Kwahu West Municipal Assembly of Eastern Region.

The mother of the pregnant girl, Abena Joyce told Agoo News, her husband normally takes advantage of the children in her absence.

The chiefs in the area poured libation to cleanse the community following the abominable act.

They slaughtered a sheep to atone for his sins and pacify the gods of the land, after he was asked to provide schnapps, 3 sheep, and other items.

The chief of Kwahu Nsabaa Nana Osei Twum Barimah in an interview with Ebenezer Kojo Nyavor expressed shock over the matter adding that this is the first of its kind after 30 years of his installation as chief.

He said the punishment will serve as deterrent to others.

“This is unbelievable, Nananom has poured libation to cleanse the land, it is up to the family to report the matter to the police for the necessary action to be taken. The libation was taken after the children confirmed to us that, their father has been engaging in sexual intercourse with them. The step daughter also confirmed the man is responsible for the pregnancy, and he also admitted something of that sort happened.’’