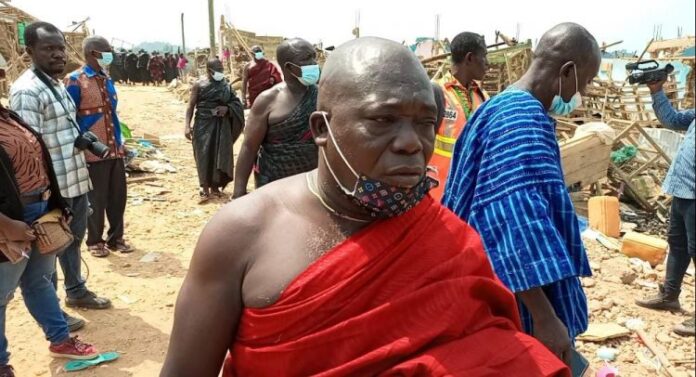 The chief of Beppoh, near Apeate, in the Prestea Huni Valley Municipality of the Western Region has revealed what could be described as a bombshell in the Apiate incident.

According to Nana Atta Kojo Bremebi, the truck transporting the explosives that caused the explosion at Apeate last Thursday did not have a police escort.

This startling revelation is contrary to a section of the police report which indicated that the explosive truck had an escort.

“I am ready to go all length to challenge anyone who claims there was a police escort when the truck was transporting the explosives”, the chief pointed out.

The Chief made the revelation when the Minister of Lands and Natural Resources Samuel Abu Jinapour and the Minister for Works and Housing Francis Asenso-Boakye visited the area to assess the extent of damage in the community and let them know the efforts the government is making to rebuild the community.

The Chief, therefore, asked for thorough investigations into the incident to ascertain what led to the huge explosion.

“If they say there was police escort, where was the policeman sitting. Was he sitting in the truck carrying the explosives or was he the one leading the truck? I’m saying there was no escort and those standing know that what I’m saying is the truth”

“If anyone wants to challenge what I am saying, he should come forward for us to question that person”, the chief said.

He thanked the government and other organizations for the massive support so far given to the affected people.

He was also grateful to the Municipal Chief Executive for spearheading the opening of an account to receive all financial support.

Mr. Samuel Abu Jinapour assured that government will go all out to thoroughly investigate the circumstances that led to the explosion on Thursday, January 20, 2022.

He promised that the investigations would be fair, accurate, comprehensive, and based on integrity.

Fameye made chief in Wassa (WATCH)

2020 polls ‘shamefully stolen’ but 2024 presidency yours – Chief to Mahama

Akufo-Addo is the Moses of our time – Twifo Hemang Chief