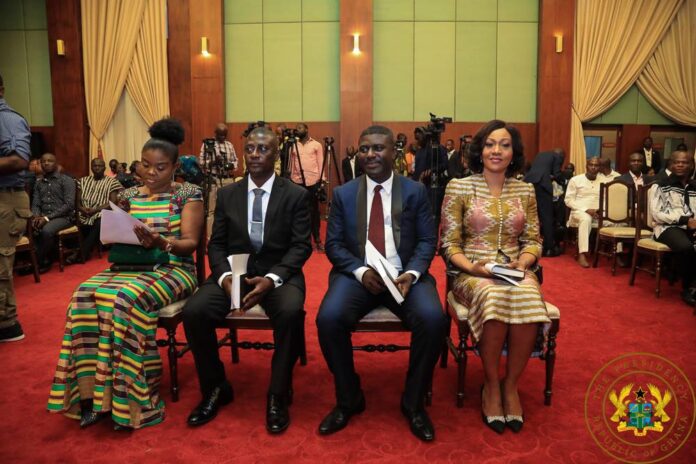 #FixTheCountry campaigners have filed a petition for the removal of the Chairperson of the Electoral Commission and other officers of the Commission in connection with the denial of the right of Santrokofi, Akpafu, Likpe, and Lolobi(SALL) to vote.

The petition, according to one of the conveners, Oliver Barker-Vormawor is in accordance with Article 146 of the 1992 constitution and is signed by 46 members of the #FixTheCountry movement.

Addressing Journalists on the matter, Barker-Vormawor maintained that there is sufficient grounds to push for a prima facie case against the EC.

“It’s our hope that if the President receives this that they treat this with dispatch as it has done previously and that he submits this to the Chief Justice who must then go on and perform the constitutional duty of determining whether or not the fact as we would lay them out amounts to a prima facie case for the impeachment of the officers so named in the petition,” he said.

Eligible voters within areas in the newly created district; namely Santrokofi, Akpafu, Likpe, and Lolobi, were only allowed to take part in the presidential election but could not vote in the parliamentary election because a constituency had not been created for them.

This triggered an ex parte application filed by residents of the Guan District who were not given the opportunity to vote in the parliamentary elections on December 7, 2020.

The Ho High Court presided over by Justice George Boadi on December 23, 2020, granted an injunction after SALL residents argued that their inability to vote in the just-ended parliamentary election amounted to a breach of their rights.

But the State through a Deputy Attorney General, Godfred Dame, filed a motion at the Supreme Court to fight the injunction placed on Amewu by the Ho High Court.

The Supreme Court in a unanimous decision quashed the orders made by the Ho High Court placing an interim injunction on the gazetting and swearing-in of Member of Parliament for the Hohoe constituency, John Peter Amewu.

Meanwhile, the SALL people in December 2021 wrote to EC in relation to its failure to create a constituency for the area.

Ing. Seth K. Owusu and Dr. J. K. Addae, Co-Chairmen, Joint Steering Committee (JSC) in a letter to the EC Chairperson and copied to the Majority and Minority Leaders, stakeholders, and selected media houses, said the failure of the people voting in the Parliamentary elections meant the non-representation for the SALL people in the 8th Parliament of the Fourth Republic.

The letter said the EC’s failure to remedy the “anomalous situation” degraded the SALL area into a “de facto colony within a democratic republic; our people having no representation in the legislative house but subject to legislative acts of compatriots.”

A crusader for the SALL people, Professor Stephen Kwaku Asare, aka Kwaku Azar believes that a constitutional crisis was created on December 6 when the EC issued an unconstitutional directive to voters of these areas to stay away from the parliamentary elections.