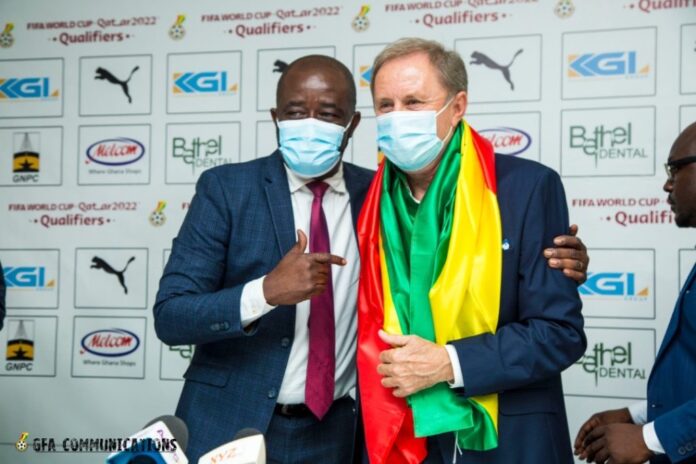 The President of the Ghana Football Association (GFA), Kurt Edwin Simeon Okraku, has said that he has no regrets giving former Black Stars captain and coach Charles Kwablah Akunnor the sack and going for Serbian tactician Milovan Rajevac.

In what appears to be a defence of the returnee Black Stars coach, Kurt Okraku said all coaches go through challenges in their careers and in the case of Milovan Rajevac, it was “unfortunate” he not have even four days of continuous engagement with his charges before travelling to Cameroon for the 33rd Africa Cup of Nations.

“It is also true that Milovan has had an unfortunate time with our Black Stars. Unfortunate in the sense that he has never had even four days uninterrupted to train this squad since he took over the ship,” he told host Johnnie Hughes on Thursday morning, a few hours after the team arrived from Cameroon.

“Most often, he had to train his team two days in going to competition and this is a fact.

“We believed that the AFCON platform would give all of us the needed space to train the squad but what happened? FIFA gave a directive that players could stay with their clubs up to the 3rd and 4th of Janaury and the competition started on the 9th of January.

“Again, not more that four days of uninterrupted full-house training. Lets be fair.”

He also observed that the squad taken by Ghana to the tournament was predominantly made up of “new” players of 17 debutants.

Ghana’s campaign in Cameroon has become arguably the most disastrous in the history of the four-time winners.

The team lost 2-0 to the Atlas Lions of Morocco in their first game, drew 1-1 with the Panthers of Gabon and lost 3-2 to debutants Comoros Islands in a match captain Dede Ayew received a straight red card.

For him, there should be an introspection for cool heads to prevail for the next task ahead.

But he insisted that sacking former coach CK Akunnor is not a regrettable decision his administration took.