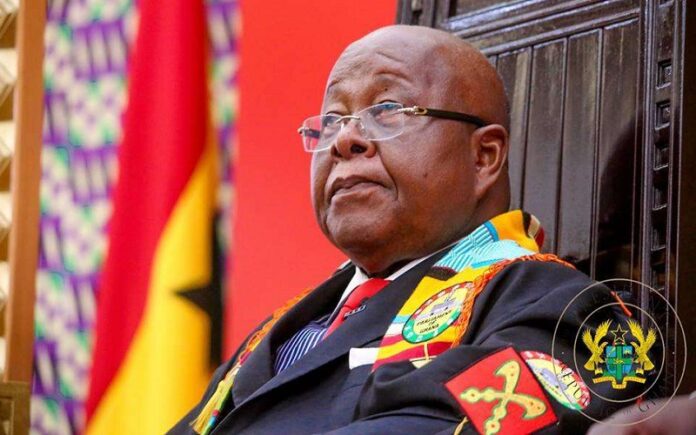 Former Speaker of Parliament, Professor Mike Aaron Oquaye has denied reports that he was offered military protection while serving as Speaker in the7th Parliament of the Fourth Republic.

Prof Oquaye said the reports are false and should be dismissed.

“My attention has been drawn to a media reportage that I Prof Aaron Michael Oquaye, was given military protection while I was the Speaker of the 7th Parliament of the 4th Republic.

” I wish to categorically state that this is palpable false. I was never offered Military protection nor did I request for any. I had only three policemen to move with me and provide security at all material times.

“This information can be easily verified by anyone who cares for the truth at the office of the Clerk-to-Parliament at any given time..

“I will pray that my name is left out of this media discourse on military protection and call upon all discerning Ghanaians to disregard any misleading reportage on the same.”

The Ghana Armed Forces (GAF) has said that the four soldiers who have been withdrawn from the Office of the Speaker of Parliament were attached to that particular office without proper procedure.

This resulted in the decision to withdraw them while efforts are made to regularise their attachment, a statement said.

“The under-named military personnel were attached to the Office of the Rt Honourable Speaker of Parliament without the proper procedure,” the statement signed by the Chief of Staff of the Ghana Armed Forces, NP Andoh to the Speaker said.

“It is humbly requested that the personnel are withdrawn with effect from 14 January 2022 while efforts are made to regularise their attachment.”

Member of Parliament for Banda and Deputy Minority Whip, Ahmed Ibrahim, claimed that the removal of the soldiers who were attached to the Office of the Speaker, was on the orders of President Nana Addo Dankwa Akufo-Addo.

Speaking on the News 360 on TV3 Saturday January 15, the Member on the Defence Committee said the news of the removal came at a shock to the Minority in Parliament.

“This came to us a great shock,” he said, adding that “this is the time we all need to come together to work on security.

“We are surprised as a minority to hear government withdrawing the military detachment of the speaker. The speaker is number three, even the EC chair is using about ten Military personnel. So if the Speaker duly requested for four and they have been on duty for over one year, the questions is what has changed? It raises security questions.”

He added “It is president Akufo-Addo who has withdrawn the military detachment, he is the Commander in Chief of the Armed Forces. The Minority will meet on Monday.”