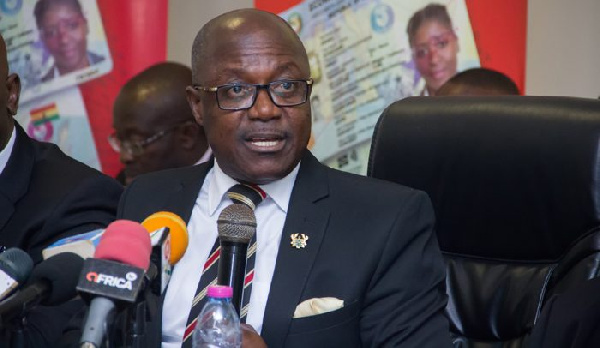 The National Identification Authority (NIA) has doubled down on its concerns about the quality of biometric data to be collected by the National Communications Authority (NCA) in the ongoing SIM re-registration exercise.

“The NIA stands by every statement contained in its response letter of 13th September 2021 as being technically factual, accurate, correct and honest,” the authority’s Acting Head-Corporate Affairs, Abudu Abdul-Ganiyu, said in a Wednesday 19 January 2022 press release.

Mr. Abdul-Ganiyu’s release was in reaction to a story by B&FT titled ‘SIM Reregistration: NIA raises doubt about the quality of NCA bio-data collection’.

The B&FT reported in its Wednesday 19 January 2022 edition that the ongoing SIM re-registration exercise is likely to face some setbacks because the NIA is concerned about the quality of biometric data collected by the NCA during the exercise.

The NIA’s reservations about the quality of biometric data to be collected was contained in a letter dated September 13, 2021 titled ‘RE: SIM Registration Exercise – Biometric Identity Verification via NCA Android Registration Application’ and addressed to the Ghana Chamber of Telecommunications: after its letter dated September 3, 2021 seeking to confirm whether the NCA’s biometric data for the SIM card re-registration was of a format and sufficiently high quality for successful verification against the National Identification System.

After explaining that the design and development of the process by which the NCA – acting by itself or through a third party – would collect and store biometric data of SIM cardholders are exclusive to the NCA, and that the NIA did not have any input in development of the Android Registration Application, the NIA said without equivocation that for that reason it was “unable to confirm that the biometric data to be collected by the NCA for the purpose described above will meet the standard that enables successful verification against the National Identification System (NIS) database”.

Despite standing by its reservations over the quality of biometric data to be collected, the NIA however expressed its “unflinching support for the SIM card registration in the country, and does not in any way contest the mandate of the Ministry of Communications and Digitalisation (MoCD) or the National Communication Authority (NCA) to implement SIM card registration in accordance with the law.

“For the avoidance of doubt, NIA reiterates its ardent support for SIM card registration in this country as an important government policy. The NIA greatly values inter-agency cooperation and collaboration for the attainment of government’s development policies and programmes.

“To this end, it has successfully cooperated, within the framework of the law and public policy with other user agencies – such as SSNIT, NHIA, GRA and the Controller & Accountant-General’s Department – in advancing data harmonisation and integration in this country; and will continue to do so with the NCA and other state institutions,” stated the authority’s Acting Head-Corporate Affairs.

He therefore, urged the general public not to construe the leaked letter of 13th September 2021 as constituting an attack on the ongoing SIM card registration exercise’s importance.