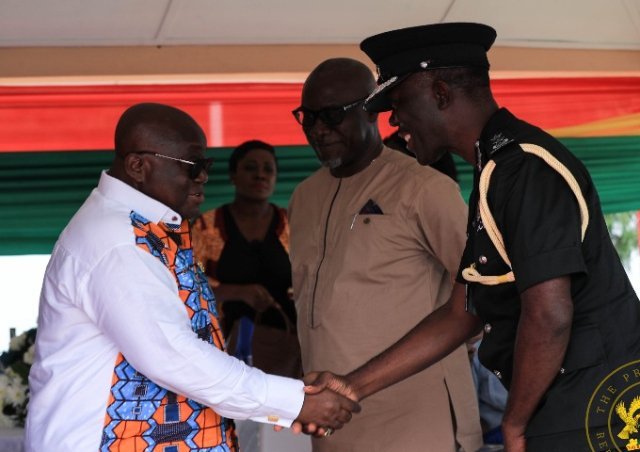 Speaking at a brief ceremony to launch the two services as well as to commission a new out-patient department (OPD), at the Police hospital annex, today the 11 January 2022, President Akufo-Addo said the newly commissioned services and the OPD project are designed to offer Police service personnel the requisite support in their time of need.

“Constructed with an equally modest sum of GHc 50,000.00, the Virtual medical centre which is an end to end video medical management system will allow patients no matter where they are located in the country to undertake Virtual consultation with healthcare professionals at this [Police] hospital” PresidentAkufo-Addo said.

“Police personnel irrespective of their location, can all access healthcare services from the hospital anywhere in the country at anytime”.

“Officers of the service are guaranteed a protected platform seemless consultations with the doctor” he added.

Turning his attention to the fund, President Akufo-Addo, said he is “delighted to launch the 6.1 million cedis Police emergency medical intervention fund aimed at providing immediate financial assistance for the medical treatment of Police officers who get injured in the line of duty”.

“I have been assured that beneficiaries do not have to go through the usual beaurocratic associated with delays which have in the past, resulted in some cases with personnel loosing their lives while awaiting treatment and deterioration of medical conditions of some others” President Akufo-Addo noted.

The first three beneficiaries of the fund, Chief Inspector Victor Anako, Inspector Theresa Ohene and Geneal Corporal Isaac Asuman Opoku, were presented with cheques covering the total costs of their treatment both in Ghana and abroad.

“I am hopeful that all Police officers that require treatment will receive the best of care without recourse to the cost of treatment” the President said.

President Akufo-Addo made what he says is a modest contribution of one hundred thousand Ghana cedis (GHc 100,000.00) to the Police emergency medical intervention fund.

Inspector General of Police (IGP), George Akuffo Dampare, in his welcome remarks registered the appreciation of the Police service to government for all of her efforts aimed at retooling security agencies, particularly, the Police, to enable them carry out their duty of protecting life and property.

“You have demonstrated immeasurable and historic commitment to the Police service over the years and we must say we are very grateful” the IGP Akuffo Dampare said.

“Indeed, history will be very kind to you [President Akufo-Addo] when tomorrow comes” he added.

The three initial beneficiaries according to the IGP have waited for between 15 years and a year to receive the support. To this end, he thanked the President and his government for providing the seed money of 6.1 million cedis for the fund.