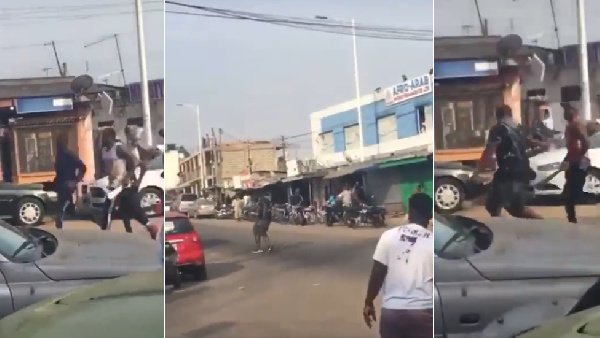 The Police Service has announced a GHC20,000 bounty on the heads of the alleged ringleaders of the Tuesday violent clash between two rival gang groups in Nima in Accra.

The suspects being sought after by the Police are Ali Awudu alias Bombon and Ibrahim Hussein alias Kumodzi.

Gangsterism of this height will not be accepted by the Ghana Police Service, and we will do whatever it takes to make sure we nip them in the bud and dismantle their network.

“So far, police have said the tensions were the latest attempts to “lord over each other,” though the exact cause of Tuesday’s violence remains unknown. There have been occasions where they have had a lot of fights at the lower level without coming to the light,” Director of Public Affairs of the Ghana Police Service, ACP Kwesi Ofori told the media at a press conference Wednesday night.

Nine people have so far been arrested following the incident after two more were picked up Thursday night. Police however say some injured persons are also avoiding public hospitals for fear of being arrested.

The two rival groups reportedly clashed after one group attacked a member of the other group when he visited the Mamobi neighbourhood to transact some business.

Opinion: Akufo-Addo and Bawumia’s modern Nima city that never was – Talk is cheap!