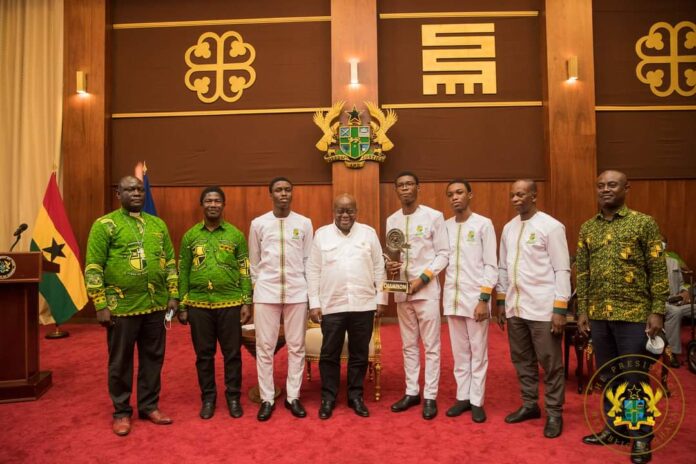 President Akufo-Addo says the Prempeh College winners of the 2021 edition of the National Science and Maths Quiz (NSMQ) competition, are the future of the country and that they should not rest on their oars after their victory.

Prempeh College on Friday 26 November 2021 won the 2021 edition of the National Science and Maths Quiz held in Kumasi.

They beat off competition from Presbyterian Boys’ Senior High School (PRESEC) from the Greater Accra Region and new entrant Keta Senior High and Technical School from the Volta Region.

They won with 53 points as against 49 points by the Presbyterian Boys’ Senior High School (PRESEC). Keta Senior High and Technical School (KETASCO) came third with 30 points.

Addressing the headmaster of Prempeh College, the three students who won the 2021 competition, management of Prime Time Limited, organizers of the NSMQ competition and a host of former students of Prempeh College at the Jubilee House today 6 January 2022, when they paid a courtesy call on him to present their trophy, President Akufo-Addo, said the ability demonstrated by the competing students in the NSMQ is the best possible indication of the security of the future of the nation.

“I am very encouraged that we have a school like yours in our country which is demonstrating ability, and capacity in the knowledge of science”. It is the best possible indication of the security of our future. You are that future and your capacity to master the sciences in the best possible guarantee that Ghana’s future is going to be bright” President Akufo-Addo said.

Headmaster of Prempeh College, Aaron Attuah Gyau, in his brief remarks before leading the students to present their trophy to President, requested of government to come to the aid of the college and to complete an eighteen (18) unit classroom block that was started during the era of former President John Kufour.

President Akufo-Addo in his response noted that the request of the headmaster can only be right.

He added that it is certainly his duty to complete what his former boss (former President John Kufour) whom he served in two different capacities during his Presidency, started and that he will do.

Managing Director of Prime Time Company Ltd, the organizers of the NSMQ, Nana Akua Ankomah-Asare in her statement, lamented about the lack of adequate funding for the state to support the execution of the competition. She pleaded with the President to charge the Education Minister, Yaw Adu-Twum, to make funding available to organizers of the NSMQ.

However, President Akufo-Addo in response to the request noted that while he commends Prime Time for their good work, he is disturbed about the issue of funding.

He indicated that his enquiry from the Education Minister points to the fact that he is aware of access to funding challenges of Prime Time.

He therefore urged the management of Prime Time to take immediate steps to meet with the Education Minister to settle the matter forthwith.

The NSMQ is the longest-running independent production on television in Ghana. The programme is very popular with not only its main target group – senior high school students – but also parents and, especially, former students (old boys and girls), who take great pride in the performance of their schools during the competition.

The objective of the National Science and Maths Quiz has been to promote the study of the sciences and mathematics, help students develop quick thinking and a probing and scientific mind about the things around them, while fostering healthy academic rivalry among Senior High Schools. Without a doubt, these aims have been achieved.

The quiz, popularly referred to as “brilla” by many who have gone through the secondary school system, is one of the very few highly anticipated academic events that brings all of Ghana’s secondary schools together.