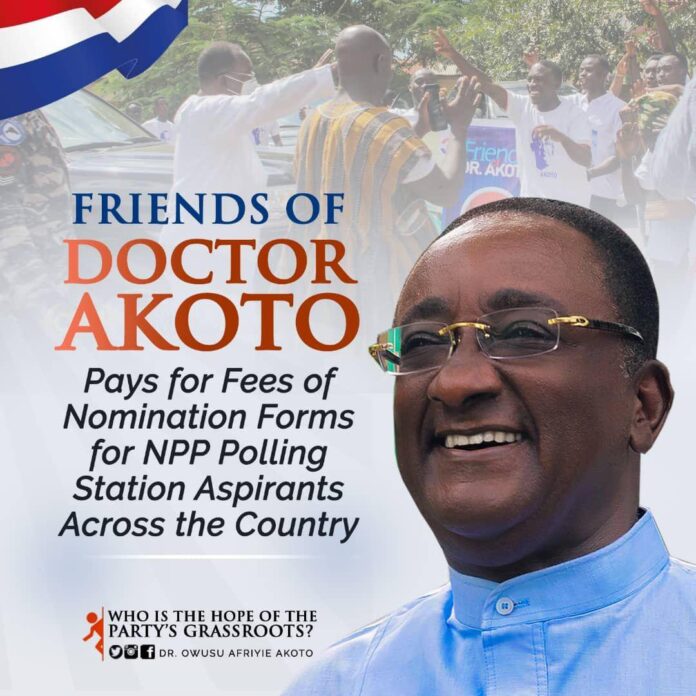 Election of political leaders is one of the most important functions of every formidable political party that has a firm belief in the principles of democracy.

The polling station executive structure forms the basic unit of the New Patriotic Party’s (NPP) leadership, and as the Party prepares itself for new leadership in the 2024 general elections, it has become a necessity to reorganize the base of the party by electing new executives at the various polling stations across the country.

The party, in accordance with its constitution opened nomination on the 19th February, 2022 for all prospective aspirants.

Friends of Dr. Akoto in pursuit of an equal opportunity for all prospective aspirants in strengthening internal democracy has paid for the fees of the nomination forms for all the aspirants of the over 38,000 Polling stations across the country.

The payments have been done through the respective regional and constituency representatives of the group.

The group believes that robust executives at the polling station level is integral to the adequate preparation by the Party towards its objective of securing victory in the 2024 General Elections.

And therefore has deemed it as a necessity to absorb the entire cost of all aspirants to help garner “incorruptible” support for the party at the base.

The Friends of Dr. Akoto is made up of blue blooded NPP Stalwarts whose lives have been impacted over the years by Dr. Akoto with his exemplary traits and achievements.

They are also a group of people who believe in the ideologies and political visions of West Africa’s best performing Agric Minister, and feel, he is the best among the prospective aspirants to lead Party and Country.