The National Concerned Small Scale Miners Association, Ghana (NCSSMAG) have threatened to sue government over what they say is the unlawful burning of excavators by government-deployed soldiers in the Ashanti region.

The association estimates that some 50 excavators and other earthmoving equipment have been torched by soldiers in the last 2 weeks in three mining districts in the Ashanti region.

In a press release copied to MyNewsGh.com on Wednesday, the association also accused the soldiers of the Operation Halt of extortion and targeting of certain miners to push them out of business. 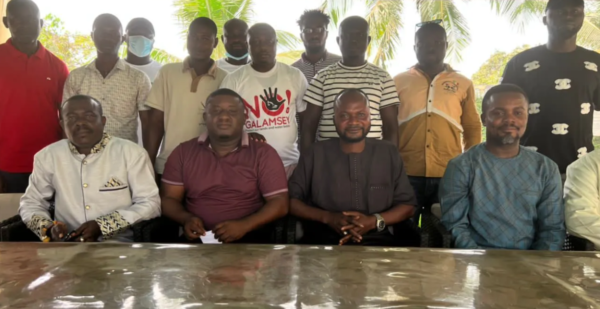 “We are by this press release calling the attention of the Ministers for Lands and Natural Resources and Defence to the atrocities being visited on small scale miners in legal employment and demand the immediate abortion of the operation or we would be forced to employ every means possible to safeguard our investments,” their statement read in part.

Read below their full press release:

The National Concerned Small Scale Miners Association. Ghana (NCSSMAG) wishes to express our disgust at the recent happenings in the small scale mining sector, particularly in the Ashanti region where government-deployed soldiers are embarking on an onslaught against regular and duly licensed operators.

There appears to be a grand scheme to throw miners who are unwilling to part with huge sums of money to the soldiers in the Operation Halt out of business.

Within the last two weeks, up to fifty (50) excavators belonging to small scale miners operating with all the requisite paperwork and within the confines of the rules of engagement have been set ablaze by Operation Halt within Obuasi, Manso and the Amansie mining areas.

It is worth noting that, most of these excavators were either out of use at the times of the operations or torched away from any mining site; this suggests to us that there is a ploy to target and throw certain individuals out of business, where as heavy equipment ravaging the bellies of the forests and river bodies were ignored because, they belong to people in high places.

The association has incontrovertible evidence to prove that the soldiers deployed by the government are only interested in cashing in on the operation. charging a minimum of GHC 45,000 if a miner wants to have the peace of mind to do their work.

The unjustifiable burning of excavators is only a face saving strategy to cover up the extortion that the soldiers are perpetrating in the Ashanti region.

We acknowledge and support any move by the government to stem the illegal mining menace bedevilling our dear country but roundly frown upon any move which threatens to undermine the gains so far made, following the moratorium of 2017.

We are by this press release calling the attention of the Ministers for Lands and Natural Resources and Defence to the atrocities being visited on small scale miners in legal employment and demand the immediate abortion of the operation or we would be forced to employ every means possible to safeguard our investments.

In the meantime, we wish to also announce our plans to take government on to seek legal redress in the ongoing impasse of burning of excavators and the seizure of minerals belonging to small scale miners.

No amount of intimation and targeting would suffice in this brazen attempt to send the small scale mining sector back to the doldrums: we hope that the outcome of the 2020 general election still serves a great lesson to the powers that be.