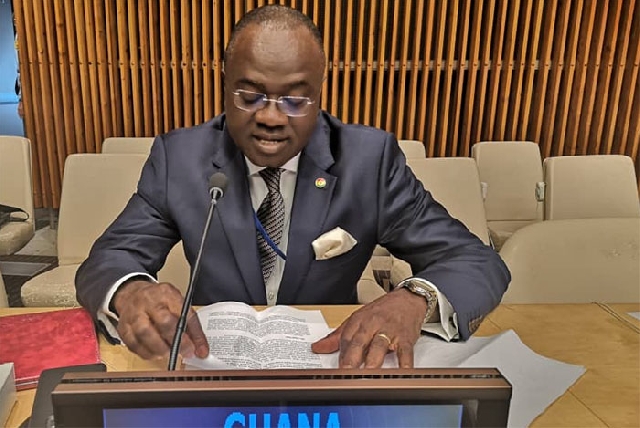 The Ministry of Foreign Affairs and Regional Integration has said the government of Ghana had no hand whatsoever in the illegal demolition of the Bulgarian Embassy in Accra.

“Government has got no hand in whatever the developer is doing,” Deputy Minister of Foreign Affairs and Regional Integration Kwaku Ampratwum-Sarpong told journalists at a press conference on Wednesday, 16 Mach 2022.

He said: “The Ministry has also formally notified the Minister for Justice and Attorney General to take appropriate action on the encroachment on the subject property”.

North Tongu MP Samuel Okudeto Ablakwa, who first blew the whistle on the raze, has identified the mastermind behind it as former Deputy CEO of Ghana Cocoa Board Dr Yaw Adu-Ampomah, who is currently an appointee of President Nana Akufo-Addo at the National Planning Development Commission (NDPC).

Read below the full statement of the Ministry of Foreign Affairs on the matter:

PRESS STATEMENT  ON THE DEMOLITION OF THE BULGARIAN EMBASSY

The attention of the Ministry of Foreign Affairs and Regional Integration has been drawn to an issue that appeared on social media on 16th March 2022 regarding the demolition of the Bulgarian Embassy in Accra.

The Ministry wishes to seize this opportunity to set the records straight on the property in question and the circumstances of the demolition.

The Bulgarian Embassy leased the subject property from the late Theophilus Kofi Leighton in 1st February 1979, which lease was extended from 1983 for fifty (50) years for which an amount of One Million Old Ghana Cedis was paid by the Embassy with the option of renewal for another fifty (50) years.

Upon the demise of the landlord, the Administrator of the Estate of the late Kofi Leighton attempted to forcefully repossess the property over alleged non-payment of rent arrears by the Bulgaria Embassy notwithstanding the latter’s full payment for the lease to the late Leighton.

Mindful of its obligations under the Vienna Convention on Diplomatic Relations, 1961 concerning host states’ obligation to the inviolability of the premises of diplomatic missions, the Ministry summoned the parties to a meeting for an amicable settlement of the matter.

Dissatisfied with the conciliatory approach of the Ministry at resolving the issue, the Administrator of the Estate of the late Leighton went to the High Court with a writ for declaration of title to the property housing the Bulgarian Embassy; payment of accumulated rent arrears; and order for ejection and recovery of possession of the property.

Part of those reliefs was granted by the High Court. However, upon appeal, the Court of Appeal reversed the High Court’s decision.

The case travelled all the way to the Supreme Court. In its judgment, the Apex Court reaffirmed the holdings of the Appeal Court, dated 21st July 2011, which overturned the decision of the High Court and affirmed the right of the Bulgarian Embassy in the leased property.

The above judgment of the Supreme Court notwithstanding, the Successor of the late Leighton sold the leased property to a private developer, who later encroached on it.

Still committed to its obligations under public international law, the Ministry, upon being informed of the encroachment of the Bulgarian Embassy, invited the parties and their lawyers to a series of meetings in January this year which were aimed at finding a peaceful resolution to the dispute.

At those meetings, the Ministry referred the trespasser to the ruling of the Supreme Court, which reaffirmed the right of the Embassy in the unexpired residue of its lease. The parties were also encouraged to reach a mutually agreed settlement on the reimbursement of the amount of the residue of lease due to the Bulgarian Mission.

The Ministry has also formally notified the Minister for Justice and Attorney General to take appropriate action on the encroachment on the subject property.