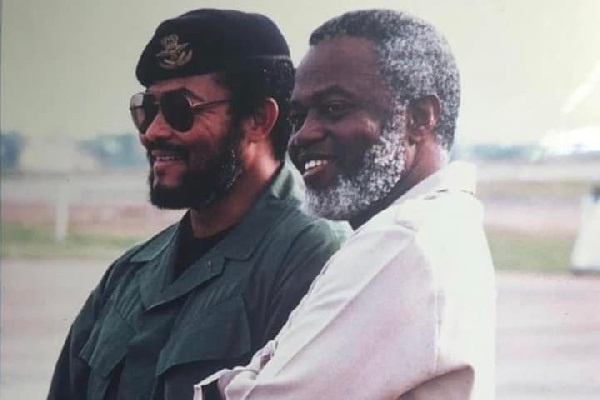 Kwabena Agyei Agyapong, former General Secretary of the New Patriotic Party, has spoken about the murder of his father and other judges in 1982 during the era of the Peoples National Defence Council (PNDC).

According to him, people high up in power must have given orders for the ‘savage’ murder of his father and his colleagues.

He particularly stated that the then PNDC Chairman, the late Jerry John Rawlings and his intelligence chief, Kojo Tsikata, must have been in the know of the perpetrators of the crime.

Speaking on Starr FM’s personality programme that aired on Wednesday, March 23, 2022; Agyapong said when asked whether he ever forgave Rawlings for the death of his father: “I think both he [Rawlings] and Kojo Tsikata died with the truth.”

“Between the two of them, they know who did it (killed my dad). I don’t think Amartey Kwei or any of the soldiers, [23-year-old Amedeka and others], had any connection to my dad and his colleagues.

“There is no way they will just walk to their house, picked them and they will go and execute them in such a savage manner without any instructions. But it is okay in life, I believe in God eternally… I believe that in life, you have to have the spirit of forgiveness,” he narrated.

On Thursday, June 30, 1982, on the eve of the 22nd anniversary of Ghana’s Republic, the three judges; Mr Justice Fred Poku Sarkodie, Mrs Justice Cecilia Koranteng-Addo and Mr Justice Kwadwo Agyei Agyepong, all judges of the High Court and Major Acquah, a retired army officer, were brutally and savagely murdered on the night of their abduction at the Bundase Military Range in the Accra Plains.

The outcome of the investigation led to the prosecution and execution of Joachim Amartey Kwei, a member of the PNDC, Lance Corporals Samuel Amedeka and Michael Senya, and two ex-soldiers- Jonny Dzandu and Tony Tekpor.