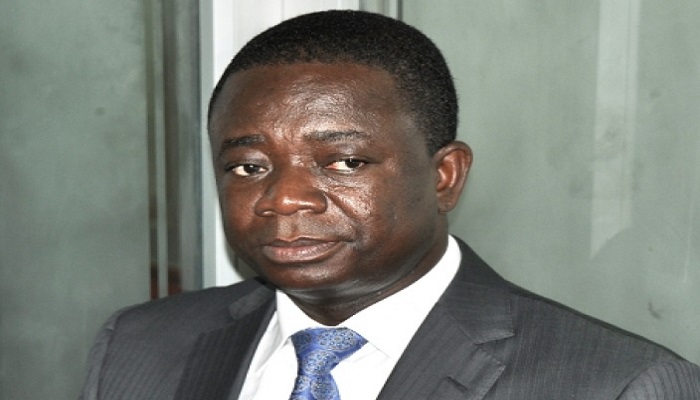 The former Director of Finance at Ghana Cocoa Board (COCOBOD) Charles Kwao Tetteh Dodoo, has told the High Court in Accra that no adverse reports or complaints were received by the board of COCOBOD from farmers regarding the use of Lithovit Liquid Fertilizer.

According to him, between 2014 and 2016 when he served on the board, “there was no formal complaint or adverse performance report against Lithovite Liquid Fertilizer that came to the attention of the board.”

The Director of Finance who is the First Defence Witness called by the former Chief Executive Officer of COCOBOD, Dr Stephen Kwabena Opuni said, there were two farmers on the board who represented the interest of farmers and report directly on issues regarding agrochemicals.

Dr Opuni, the former Chief Executive Officer of Ghana Cocoa Board, together with Seidu Agongo and his company Agricult Ghana Limited have been arraigned for allegedly causing financial loss to the state over some procurement breaches involving Lithovit Liquid Fertilizer.

They have pleaded not guilty to some 27 charges and have been granted bail.

Responding to questions under further cross-examination from lawyers of Siedu Agongo (2nd Accused) and Agricult Ghana Limited (3rd Accused), the witness said, the board received monthly reports from its various divisions but no point was there a complaint from the farmers.

Asked by counsel for 2nd and 3rd Accused, Nutifafa Nutdukpi, holding brief for Benson Nutdukpi if the board at COCOBOD have any means of monitoring or having a feedback on the performance of these agro-chemicals (fertilizers) applied by farmers that the board had approved to be procured, he answered in the affirmative.

“My Lord, various divisions of COCOBOD including CRIG (Cocoa Research Institute of Ghana) submit their monthly performance reports to management.”

He added that, “Any adverse report on agro-chemicals will come through GRIG or CHED ( Cocoa Health and Extension Division) should there be any, management will highlight it for the board’s attention, adding that, “I don’t remember having any.”

The Director of Finance also told the court that, “the board had two farmers representatives and adverse performance on crops by agro-chemicals will also be brought directly to the board meetings by these two farmers.

“But coincidentally, nothing of that sought happened if my memory serves me right.”

He also told the court that, “If any such adverse performance report came to the board’s attention, or was discussed at the board meeting, that would be captured in the board’s minutes.”

It was the case of the witness that, the board naturally, would have reacted to any such adverse performance report if it was brought to its attention.

He also told the court that, he is aware that, CHED produced annual reports on the CODAPEC HI-TECH unit from when that unit came under CHED.

On the dealings of the Entity Tender Committee (ETC), he told the court that, he served on that committee from April 2014 to Dec 2016.

He also told the court that, the committee was chaired by the board chairman and that, apart from the director of finance who served on the entity tender committee, there was also the Director of Civil Works.

But could not immediately recollect if the Deputy Chief Executive of Finance and Administration was a member of that committee.

The witness also told the court that, the ETC granted concurrent approvals for the procurement of goods and services and that, the ETC has the responsibility to consider and approve all contracts and major procurements by COCOBOD.

For instance, he said, “contracts which have been advertised and considered by a panel will come to the ETC for consideration and then by law, there are contracts which certainly have to go without PPA, so all these contracts whether PPA approvals, or by advertisement and panel evaluation will all be brought to the ETC.”

According to him, “that is how come PPA approvals come to the ETC for concurrent approvals.”

He added that, “there maybe other contracts whose value may require that it go to the Central Tender Review Board and also the Ministerial Review board.”

The Director of Finance also told the court that, “the ETC carried out this function of concurrent approvals in meetings and minutes of these meetings are kept.

According to the witness, he was regular at these meetings, and that, because the secretary to the ETC was a procurement manager who works under his supervision, “the minutes when prepared to management for approval most of the issues in them will be referred to my office for necessary action.”

He explained that, from the proceedings of the ETC, minutes of the meeting indicating various items are sent to the Chief Executive of COCOBOD.

The Criminal Division of the Accra High Court presided over by Justice Clemence Honyenuga, a Justice of the Supreme Court sitting with an additional responsibility as a High Court judge has adjourned sitting to Monday, April 11, 2022 for further cross-examination.

Prosecution has closed its case after calling seven witnesses to give evidence.

Lawyers of Dr Opuni have also indicated, they intend to call eight witnesses to testify in the trial.

Together, they are accused of causing a financial loss of over GH¢217 million to the state through the sale and purchase of the controversial Lithovit Liquid Fertilizer, which according to the prosecution, was never tested.

They have all pleaded not guilty to the charges and have been granted bail.