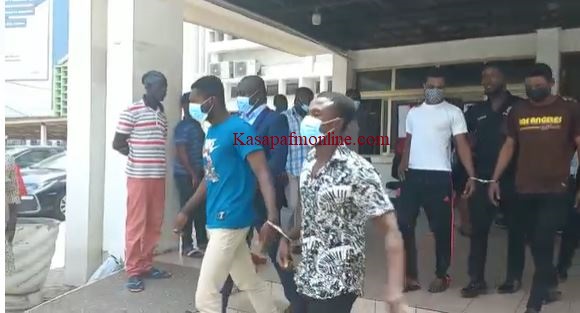 The four Police Constables who are facing charges for allegedly robbing a bullion Van and making away with over GHC 80,000 in Accra do not have any status yet in the Ghana Police Service.

According to the Police, the accused persons as per police regulation 29 of Constitutional Instrument (C176) are regarded as “police recruits.”

Deputy Superintendent of Police (DSP) Sylvester Asare while opposing the grant of bail in fresh charges against the accused persons, argued that “they do not have any status” in the Ghana Police Service.

“The accused persons have no status in the Ghana Police Service. Indeed, they are serving officers but per Regulations 29 of C.I.76, they are regarded as recruit Constables.

“They are less than 18 months in the service and per the regulations, they are not regarded as Constables yet,” DSP Asare explained to the court.

In view of this, DSP Asare said, the accused persons have nothing to lose when they decide not to go closer to any Police facility by way of leaving the jurisdiction when granted bail.

The four constables have been earlier arraigned on two counts of attempted robbery and Abetment and pleaded not guilty.

In the fresh charges preferred against them on Tuesday, April 26, the four were charged with robbery and conspiracy.

They again pleaded not guilty and were subsequently remanded into police custody after the court refused bail application from their lawyers.

The Circuit Court 8 in Accra presided over by Her Honour Mrs Adelaide Abui Keddy said, looking at the punishment associated with the charge of robbery, the court in convinced that, the accused persons will not avail themselves to stand trial when granted bail.

According to EIB Network’s Court Correspondent Murtala Inusah, the prosecution has been directed to file disclosures and witness statements within 14 days.

The case has been adjourned to May 18, 2022, for Case Management Conference.

According to DSP Asare, the prosecutor, the first to fourth accused persons are Police Officers and, sometime in the year 2021, the Ghana Police Service Administration recorded a series of street robberies as well as attacks on bullion vans.

He said the Service mounted surveillance on the suspected robbers undertaking these unlawful activities within Accra Metropolis.

DSP Asare said, on February 27, 2022, the Police received a report that some armed persons had attacked a bullion Van with Registration number GT3521-X at Kingsway, Accra Central.

He said, upon receipt of the complaint, the Police commenced an investigation into the alleged robbery and investigations led to the arrest of the Constable Reindolph Gyimah Ansah alias Pablo and Lance Corporal Stephen Nyame both deceased.

The prosecutor said further investigation led to the arrest of the accused persons.

DSP Asare said, during interrogation, the deceased officers admitted and mentioned the four accused persons and others at large as their accomplices.

“Preliminary investigation has disclosed that the accused persons were friends and recruits mates at the Police Training School,” the prosecutor stated.

He told the court that, coincidentally, “the accused persons including the deceased officers after their basic training were posted to the National SWAT Unit, Police Headquarters.”

The prosecutor said the accused persons when posted to the National SWAT Unit underwent various tactical and specialized weapon training to equip them for the function of the SWAT Unit which includes escort and protection of Bullion Vans.

“Further investigation had it that sometime in the year 2021, accused persons including their deceased colleagues and those at large met at Chorkor and agreed to attack and rob Bullion Van with Registration number GT 3521-X, belonging Belmont Resources Ltd.”

The prosecutor said, pursuant to the agreement, the accused persons on February 27, 2021, amidst shooting into the air, attacked and robbed the Bullion Van with Registration number above of cash in the sum of about (GH80.400.00).

“The accused person fled the scene on two standby motorbikes with the engine-on with the riders being A1 and A2.

“Preliminary investigation has also revealed that the accused persons and those at large took part in other robbery activities within the Capital between the period of February 2021 and February 2022 which are currently under investigation.

“Although the accused persons had admitted some and denied some of the robberies that occurred during the preceding period, there is enough evidence on record to the effect that accused persons herein together with their accomplices agreed to rob,” DSP Asare told the court.

The investigation he said continues as strenuous efforts are being made to apprehend the other accomplices.