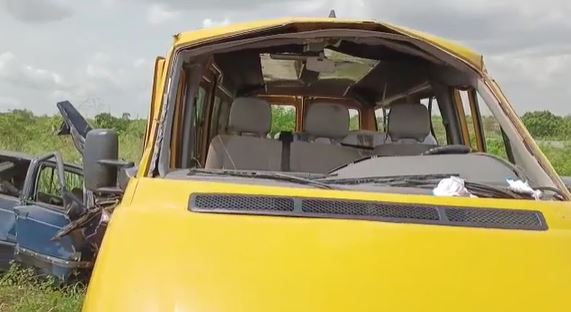 One person has died while four others have sustained severe injuries after the commercial bus they were traveling on crashed a cow at Gomoa Potsin on the Kasoa – Winneba Highway in the Gomoa East District of the Central Region.

The accident happened at Mustapha Plus junction near Potsin Junction on the Kasoa Winneba Highway on Tuesday evening.

Information gathered suggests that a cow had earlier been knocked down by a speeding vehicle and while police officers were at the scene trying to convey the cow from the highway, a speeding VW Sprinter commercial bus with the registration number GX 9541- 21, failed to stop when he was signaled by police and crashed into the cow.

Following the crash, the vehicle somersaulted several times causing the instant death of one of the passengers, a male who has not yet been identified.

Four others who sustained severe injuries are being attended to at the Winneba Specialist and Trauma Hospital.