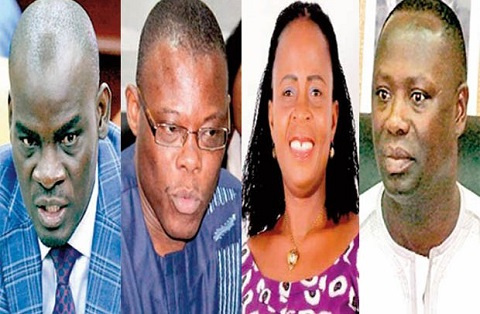 The Supreme Court has ordered a substituted service on nine Members of Parliament who have been dragged to court over double salary payments.

The apex granted the exparte motion after lawyers Kwame Baffoe, the Bono Regional Chairman of the governing New Patriotic Party(NPP) had told the court that, the defendants are evading service.

Kwame Baffoe, popularly known as Abronye DC had filed a suit at the apex court challenging the double payment of salaries to 10 MPs.

Granting the motion, the single Supreme Court judge, directed that the procesess be posted on the notice boards of Parliament House and the Supreme Court which is to last for 14 days.

The court also directed the processes to be published once in the Daily Graphic and Daily Guide newspapers.

The Chairman of the Bono Regional NPP is seeking the following reliefs;

1. Declaration that, the 1st – 10h defendants receiving “double salaries” as Members of Parliament and Ministers of State/Deputy Ministers of State between the period of 20092016 from the consolidated fund is inconsistent with Article 98 of the 1992 Constitution of the Republic of Ghana and consequently be declared null, void and unenforceable.

2. Declaration that, per Article 98 of the 1992 Constitution of the Republic of Ghana without the express permission of the Speaker of Parliament acting on the recommendation of a committee of Parliament; the 1st-10h defendants receiving double salaries from the consolidated fund between the period of 2009-2016 is unconstitutional, null and void.

3. Declaration that, the Ist – 10h defendants receiving salaries as Members of Parliament and Ministers of State/Deputy Ministers of State between the period of2009-2016from the Consolidated fund is a violation of Article 78(3) of the 1992 constitution of the Republic of Ghana.

4. An order the Honourable Court directing or compelling the Ist – 10h defendants to pay to the Government of Ghana or into the consolidated fund, the double salaries received as Members of Parliament and Ministers of State/Deputy Ministers of State between the period of 2009-2016.