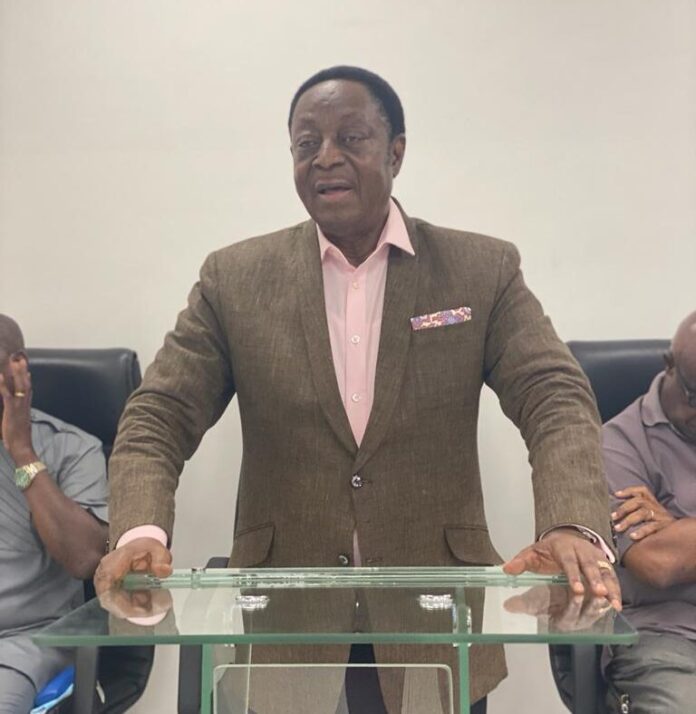 Dr. Kwabena Duffuor has donated GHC100,000 to the Eastern regional branch of the NDC in support of their outreach program ahead of the 2024 polls.

The donation was made at the Regional Headquarters on Tuesday by former National Organizer of the party Yaw Boateng Gyan, and received by National Chairman Samuel Ofosu Ampofo and General Secretary Johnson Asiedu Nketia.

The cash donation which is to be shared among the 33 constituencies in the region is to support their outreach program. Part of it will be left in the regional executive committee coffers.

Mr. Boateng Gyan in his speech said that the Ahutor Project which was launched by Dr. Duffuor at Ashaiman on April 7, 2022 will be extended to cover all 16 Regions of Ghana.

This project which is yet to be implemented is meant to lessen the burden on MPs, and relieve local executives of the huge financial difficulties they face in running the party. It is believed that the NDC Ahotɔ Project will create a medium for the local party machinery to be financially self-sustaining through regular income streams to help support their ongoing initiatives. It is also to empower and reposition the NDC and make it battle-ready for election 2024 and beyond.

According to the project manager, the NDC Ahotɔ project will be micro-businesses focusing on social events such as funerals, naming ceremonies, marriage ceremonies, durbars, political campaigns, and rallies which are mostly outdoor activities.

The nature of these activities places a high demand on the use of Plastic Chairs, Canopies, Public address systems, power generators, podiums, mobile toilets etc. A local rental business of the accessories owned and run by the party at various constituency levels, will create employment opportunities and generate income which will bring relief (Ahotɔ) to the grassroots.

Duffuor is, therefore, sponsoring and financing all the 275 constituencies with all the equipment and accessories necessary to set up a rental business.