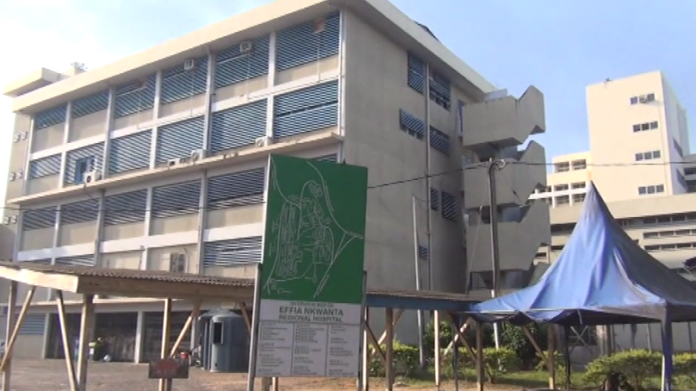 The management of the Effia Nkwanta Regional Hospital has described as false, information circulating on social media which indicts the hospital for allegedly selling the baby of a teenage mother who went to the hospital to deliver.

Reacting to the content of the video, the Medical Director of the Hospital, Dr Joseph Tambil expressed disappointment.

“I have also seen that video, and it has the potential of creating doubts about our services, some people might be misled into believing that video. I want to place emphatically without any sense of equivocation or doubt that nothing of that sort happened in this hospital” he refuted.

In a video which has since gone viral, social commentator Kevin Taylor who is domiciled outside is seen accusing the Effia Nkwanta hospital of selling the teenage mother’s baby.

He alleged the pregnant teenager was referred to the Effia-Nkwanta Hospital from the Kwesimintsim Hospital after her water broke due to some complications.

Kevin Taylor purports after she safely delivered a baby girl at the hospital, GHS180 was demanded from the family so the baby could be put in an incubator because she was pre-term.

However per his account, as the family of the teenage mother could not provide the said amount of money, the baby was pronounced dead the following day and the family was told the baby has been already taken to the mortuary without the mother seeing the body.

It was further alleged that the staff demanded money from the family before they see the body of the baby at the morgue.

It was also alleged that information on the delivery and the incident was unavailable in the records of the hospital, further raising suspicions.

However, the Medical Director of the hospital, Dr. Joseph Tambil, has described the viral video with the allegations as being fabricated, “nobody’s baby was stolen or lost in this hospital. I just want our patients, our clients, the people we work with the people of Sekondi Takoradi, the Western Region and Ghanaians in totality, to rest assured that the stories making rounds is completely false and fabricated by certain people to achieve certain parochial interest and purposes.”

Trusted sources at the hospital, confirmed to Empire News the young girl was admitted to the hospital in March this year, however they cannot reveal what transpired at the hospital owing to the patient’s confidentiality and again the girl in question’s age.

The matter has been reported to the Police and is currently being investigated.