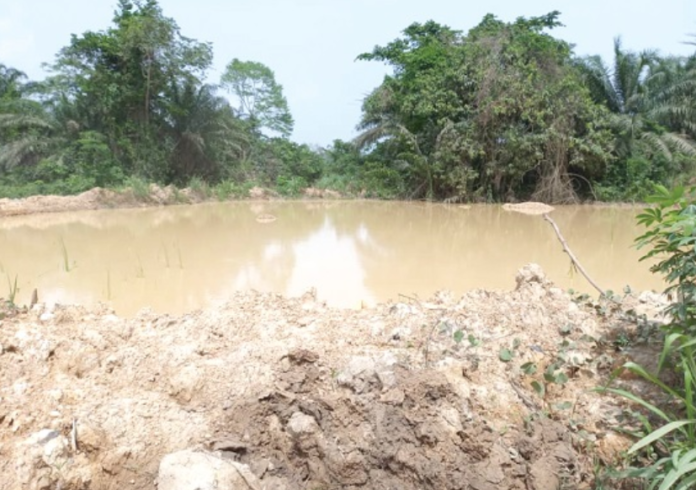 Scores of uncovered pits left behind by illegal miners are posing a serious threat to residents of those mining communities.

While many people have fallen into those pits, leading to their untimely death, others are living dangerously, as the abandoned pits serve as death traps, looking for prey.

Additionally, the uncovered pits have become breeding grounds for mosquitoes and reptiles.

To be able to extract the ore, miners dig deep into the earth, often using excavators for maximum impact.

Small-scale illegal miners also engage in similar interventions and, in the process, create the dangerous pits.

During a one-week visit by the Daily Graphic to some mining communities between March 21 and 25, this year, it observed that abandoned pits had become both a security threat and social nuisance to residents of some of those mining communities.

Some of the mining communities visited were in the Mpohor, Ellembelle and Tarkwa-Nsuaem districts in the Western Region, as well as Obuasi, Akrofuom, Amansie Central, Amansie West, Amansie Central and Adansi North in the Ashanti Region.

It was observed that mining communities in some of those districts were inundated with vast hectares of excavated land that had been left unreclaimed, as required by the country’s mining laws.

At Wamase and Akrofuom in the Akrofuom District, for instance, scores of abandoned pits were dotted around.

A similar situation was observed at Manso Nkwanta, Manso Adubia and Jacobu in the Amansie West, Amansie South and Amansie Central districts, respectively.

Residents of the mining communities narrated how they had lost their loved ones in the abandoned pits and how they continued to live dangerously because of the social impact of illegal mining.

At Wamase, a resident, Ishmael Awuah, revealed that in less than 10 years, at least 32 people had fallen into uncovered galamsey pits and died.

Another resident of the area, John Kojo Appiah, corroborated the claim.

For Alexander Awuah and Emmanuel Owusu, while the incessant galamsey activities continued to claim lives, the Wamase community had been infested with mosquitoes, making life difficult for residents.

When the District Chief Executive (DCE) for Akrofuom, Mr Morris Jonas Wood, was contacted on the what was being done about the abandoned pits, he said the assembly had begun the process of covering the pits and reclaiming land destroyed by illegal miners.

“We have received 20,000 oil palm seedlings from the Minerals Development Fund (MDF) to be planted on reclaimed land. The assembly is also raising 20,000 coconut seedlings. We will reclaim some of the land and plant the seedlings on it,” he said.

The DCE for Amansie West, Nii Lartey Ollenu, also in an interview, said the assembly was exploring means by which the uncovered pits could be covered and the degraded land reclaimed.

He said since such an initiative was capital intensive, it was difficult for the assembly to carry it out.

“I was in Accra recently to discuss the issue of reclamation with a private person who wants to invest in cassava and coconut plantation. We are trying to see how he can reclaim some of the land and use it for that farming purpose,” he said.