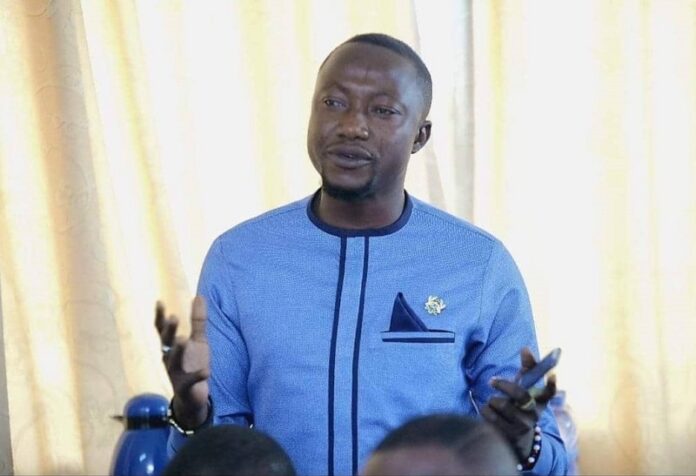 The General Secretary of the New Patriotic Party, Mr. John Boadu (JB), is seeking refuge at the Jubilee House by campaigning on the strength of the office of the Vice President, Dr. Alhaji Mahamudu Bawumia.

This seems to suggest to well-meaning party folks that the General Secretary has lost in advance, a contest yet to commence. His aggressive posture to use the perceived “ADWENK3SE3″ tactics to win the race at all cost should not be allowed to disintegrate our party.

His demeanour leading to the July elections of national executives of the party portrays a double-dealing, bewildered and a disoriented administrator whose sense of imminent electoral defeat leaves him in a state of despondency and desperation. This defeat, he would do anything to avert, no matter how much it costs the party. Thus, the display of “Adwenk3se3!”

JB touts himself “Adwenk3se3.” Truly, he is! Perhaps, it is now time to call attention to the deception concealed by the pretense of that tag.

“Adwenk3se3,” in the Akan Language, connotes two contrasting attributes of an individual. First, it describes the astuteness and the versatility of a person to produce desired and expected influences on individuals and society. On the other hand, depending on varying contexts, “Adwenk3se3” describes deviance, a perpetrator, an opportunist, a trickster, and more such traits. Simplified, “ADWENK3SE3” suggests using a clever means to cheat or outwit others of something valuable.

Experienced, as the CEO of the New Patriotic Party claims to be, Mr. John “Adwenk3se3” Boadu should understand that going into the polls of 2024, factionalism and divisiveness is one of the fundamental hurdles to overcome to achieve a decisive victory. Unfortunately, this is what he is engineering as he seeks re-election. The display of parochialism and maladministration by Hon. John Boadu is indeed, “Adwenk3se3!”

It is astonishing to learn that the Chief Executive Officer of the great elephant party is moving from one region to the other, using the Vice President to solicit sympathy, empathy, and votes from perceived supporters of the Vice President at the Northern Belt of the country.

When he met with the potential regional and constituency delegates in the North East Region, the General Secretary is alleged to have intimated that his re-election would catapult the Vice President, Dr. Mahamudu Bawumia, as the eventual winner of our party’s next flagbearership race. This assertion, he cunningly made at the home region of the Vice President, knowing how likely the Vice President may appeal to the people of the Northern part of our country. This is “Adwenk3se3″ at work!

The General Secretary is supposed to be the embodiment of unity in our party. His evenhandedness should promote cohesion among party faithfuls which is of prime significance to our breaking the eight agenda.
Regrettably, this has not been the case for Mr. John Boadu.

To publicly declare support for a particular potential flagbearer by the General Secretary ahead of the presidential primaries is not just unhealthy but also it shows how desperate Mr. John Boadu is to cleverly activate the ADWENK3SE3” machinery. This is such a damaging development heralding our preparedness to break the eight.

Beyond the attainment of self-gratification, such machinations fuel up anarchy in our party, and are detrimental to our electoral fortunes. Accordingly, they must be censured without hesitation!

Mr. John Boadu has demonstrated clearly that he is bereft of the fortitude and fresh ideas to reorganize our party after our Presidential Primaries for the 2024 elections.

As he makes claims of unprecedented achievements during his administration of the party, he is called, herein, to leverage on those “achievements” (if such are only relatable), and maintain “electoral sanity” in the supreme interest of the New Patriotic Party than to seek refuge at the office of the Vice President for his retention.

The NPP needs a Joshua, a Caleb, with optimism and new ideas to break the 8 year Jinx.

NB. Views expressed by the author are entirely his and do not represent the position of Kasapafmonline.com