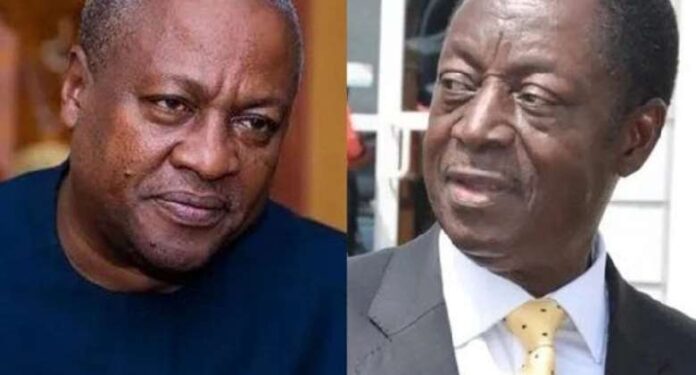 A group of National Democratic Congress (NDC) members in the Volta Region who say they are throwing their weights behind the flagbearership ambition of former Finance Minister, Dr. Kwabena Duffuor, have gone confrontational with former President John Mahama and his supporters.

In a statement released on Thursday, May 12, 2022, the group accuses “the Mahama gang” of using “communist inferior tactics” against Dr. Duffuor and his admirers out of fear. “We are seeing the subtle attacks in the form of people secretly trying to convince party members to ignore Dr. Duffuor even though the time for campaigning has not yet come.

We want the Mahama gang to know that we know what is going on; there is a secret campaign to blemish Duffuor in the minds of the party members out of fear that Dr. Duffuor will win the presidential primary and lead NDC in the 2024 elections,” the group said in a statement.

The statement is signed by Mr. E. Adjorlolo and Mr. Kofi Mensah both of the Ketu South constituency branch of the party.

The release comes in the wake of allegation that some persons are secretly prosecuting a campaign of discrediting Dr. Kwabena Duffuor within the NDC party even though the party’s leadership has not officially opened a campaign season.

According to the revelations. the anti-Duffuor campaign focuses on making Dr. Duffuor to look bad by all sorts of claims, including that Duffuor is an NPP mole within the NDC.

According to the revelations, the anti-Duffuor campaign focuses on making Dr. Duffuor to look bad by all sorts of claims, including that Duffuor is an NPP mole within the NDC.

“We have heard the lie that Duffuor has been an NPP mole within the NDC and that he has now only become cozy with the NDC because Akufo-Addo has deliberately collapsed his bank so that Duffuor’s quest for the 2024 flagbearership is in hopes of being elected as president so that he can get his bank back.

“We want those on that propaganda to know that we are not children because we know that the reason why the Mahama gang is lying is because their boss, Mr. Mahama is afraid of Duffuor. Mahama is scared of Duffuor, plain and simple,” the statement by
Mr. Adjorlolo and Kofi Mensah said.