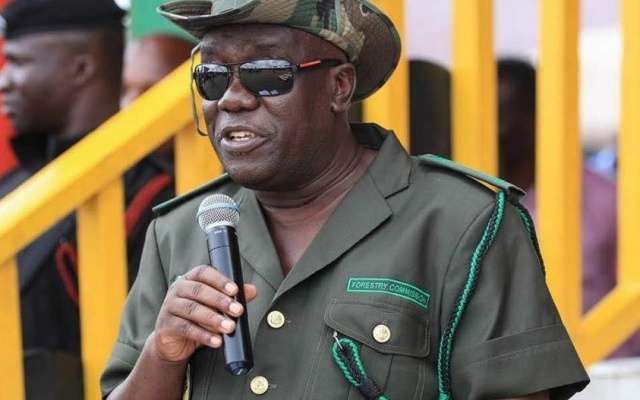 Those were the words of the late chief executive officer (CEO) of the Forestry Commission, Kwadwo Owusu Afriyie, when he visited the Sakumono Ramsar on August 7, 2018.

But almost four years later, it has emerged that the man whose duty it was to protect the Ramsar site from human activity actually got a portion of the land for himself.

Popularly known as Sir John, the self-acclaimed knight of Ghana politics actually got 5.07 acres and willed it to his four sisters: Abena Saah, Comfort Amoateng, Abena Konadu and Juliet Akua Arko, and their children.

That is more than 20 plots of the protected land, which is a buffer zone to protect Tema, Sakumono and their environs against flood, pollution, breeding of fish for the Sakumono Lagoon as well as for recreational activities.

The Ramsar sites are also serve as the relaxation and feeding grounds for over 70 waterbird species. That particular site serves as the breeding ground for about three marine turtle species.

The Ramsar sites are not for human habitation, a reason the Forestry Commission head warned the chiefs and people who traded the land for development projects.

As he went round with a retinue of chiefs, Forestry Commission officials and officials of the Tema Development Company, Sir John asked owners of unauthorised buildings at the Sakumono Ramsar site to rectify their stay on the land as tenants as no chief had the right to sell the protected area to them.

“When I saw the encroachment in Klagon, I thought that was even serious, but what I’ve seen here even makes it worse. Indeed, both the right side and the left side are all parts of the Ramsar site and yet, the massive encroachment we’ve seen beggars disbelieve(sic),” he said.

He continued, “Those who alleged that they bought it from the chiefs should go back and collect their monies. If they got it for free, fine then there is nothing to worry their head about. But whatever it is, we can’t let them[houses] stand. It will be demolished.”

The Sakumo Ramsar Site was established alongside four other coastal Ramsar Sites in 1992.

It is the only wetland wholly owned by the government. The other four sites—Keta, Songhor , Muni-Pomadze, Densu Delta– belong to stools.

While insisting that the commission had no intention of demolishing existing properties on the site, he warned that the Commission would not tolerate any new development in the area which had been encroached upon by developers who had filed the wetlands and built structures without permits.

“After 2006, we noticed that the place was being encroached by illegal developers. We did carry out some demolition in the past with the support of the Tema Metropolitan Assembly and TDC,” he said.

Sir John also said the commission had demarcated the area, setting a buffer zone that could not be crossed.

But it appears he crossed that buffer zone before crossing to the other side.

It is not just at the Ramsar site Sir John acquired land, he also acquires lands in the Achimota Forest.

In total, he acquired four parcels of land at the Achimota Forest, the biggest one being 5.541 acres.

These details are contained in the will he made less than two months before his death.