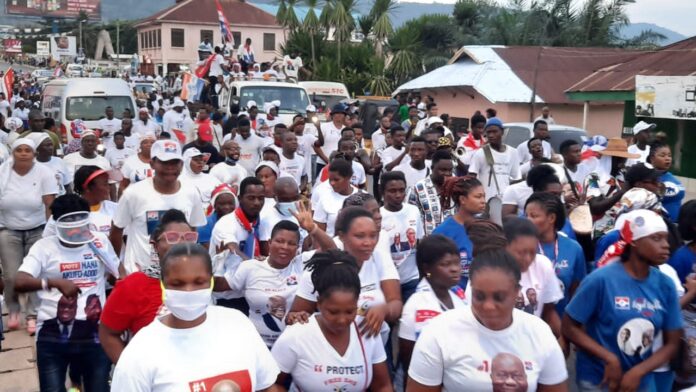 A nine-member vetting panel led by the District Chief Executive for the North Dayi District, Edmond Kudjo Attah has successfully vetted some thirty-four (34) applicants who are seeking to lead the ruling New Patriotic Party as Regional Executives for the Volta region.

The two-day vetting exercise which began on Wednesday, saw eighteen (18) of the aspirants appearing before the Committee and another (16) who appeared on Thursday after successfully filling their nominations not later than Tuesday, May 17, 2022.

Speaking to journalists on the final day of the vetting exercise, Chairman of the Committee, Edmond Kudjo Attah noted, that the NPP in the Volta region is in safe hands given the calibre of persons who appeared before the committee seeking to lead the party.

He said, “The NPP in the Volta region is growing from strength to strength and given the calibre of persons who appeared before the committee, there is no doubt the fact that we have the human capital. So I am confident that the choice of people; whichever way it goes, we are building a formidable front that will be able to propel the NPP in the Volta region in the next four years.”

The Chairman further urged the aspirants and their supporters to conduct their campaign in a peaceful and orderly manner to enhance party cohesion, indicating that “we must bear in mind the fact that we are set on breaking the 8 and must remain united to achieve that.”

On disqualifications, Mr. Edmond Kudjo Attah said the committee would sit again to determine the fate of every aspirant vis-a-vis the regulations set out by the National Executive Committee of the party and the party’s constitution on elections.

The nine-member vetting Committee also included MP for Hohoe and Minister for Railways Development, John Peter Amewu, a for Chief Executive for Danquah Institute, Mr. Richard Ahiagbah and other representatives.

In the race for Regional Organiser, there is Korsi Bodja (incumbent), Christo Wisdom Klutse, Kofi Agrah and Prince Shelter Adjorlolo.

For the Women Organiser race, there are Afi Rejoice Adjagbo (incumbent), Mabel Agbletor and Hannah Ashade.

Other aspirants include Zain-UL-Abideen Ballah Sulleyman, Mudashinu Adebayor, Abdulai Kamila and Suala Abdulai who are contesting for the position of a Nasara Coordinator.