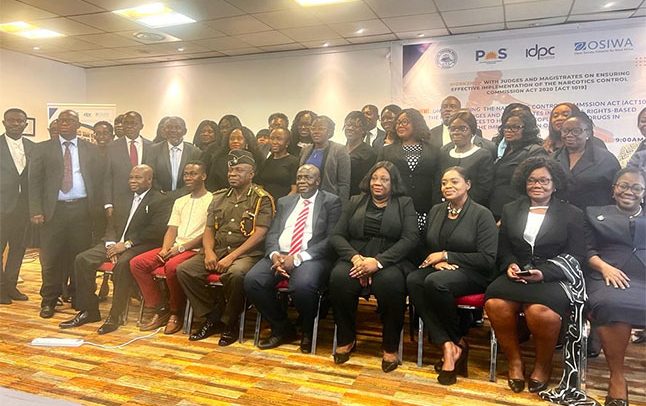 Some Judges and Magistrates have undergone a one-day training workshop on the new Narcotic Control Commission Act 2020 (Act 1019).

The workshop is part of efforts to sensitize critical stakeholders, particularly Judges of the Lower and Higher Courts to know their role in the enforcement of the new policy.

It is organised by the POS Foundation and the Judicial Training Institute in partnership with International Drug Policy Consortium (IDPC) and West Africa Drug Policy Network (WADPN) – Ghana chapter with funding from Open Society Initiative For West Africa (OSIWA).

The new Act was passed on March 20, 2020 and assented to by the President on May 11, 2020. The new law represents an important example for drug policy reform advocacy in West Africa.

Ghana’s new drug law seeks to treat drug use and dependence as a public health issue rather than focusing on law enforcement, incarceration, punishment and repression.

The new law has converted the prison term for drug possession for personal use into a fine of between 200 and 500 penalty units (translating to GH₵2,400 to GH₵6,000).

Speaking at the opening ceremony, a Court of Appeal judge, Justice Sir Dennis Adjei, stated that the new Act is intended to address the inherent problems of the old law which did not take into account the interest of persons who may decide to use cannabis, and other narcotic drugs but not to sell or distribute same although it is not permissible to do so.

He said one challenge associated with the old law was how judges and magistrates interpreted the ‘possession’ and ‘use’ component of it “which rendered the text absurd because some of us were of the opinion that before it comes to you for use, you must possess it”.

“The law maker intended that when it was for use then you supress the possession and make use of the use so now the new law has taken that into account and it has clearly stated the position. And there are other things that the new law has introduced, particularly with respect to sentencing and procedure”, Justice Adjei added.

Executive Director of POS Foundation, Jonathan Osei Owusu, indicated that the new Law provided that instead of sending people to prison for up to 10 years for possession of drugs for personal use, they will offer alternatives to incarceration and criminalisation.

He said further to the discourse on the implementation of the new law, it is important to sensitize critical stakeholders, particularly Judges of the Lower and Higher Courts to know their role in its delivery while consulting them on the best practice in the implementation process – including the provision of harm reduction to people who use drugs when they come into contact with them.

The Director General of Prisons, Isaac Egyir, in a speech read for him commended the fact that the new Act has made provisions for alternatives to imprisonment, including fines for offence of drug possession for personal use although the Prison Service still receives persons convicted and sentenced to prison for narcotic drug use.