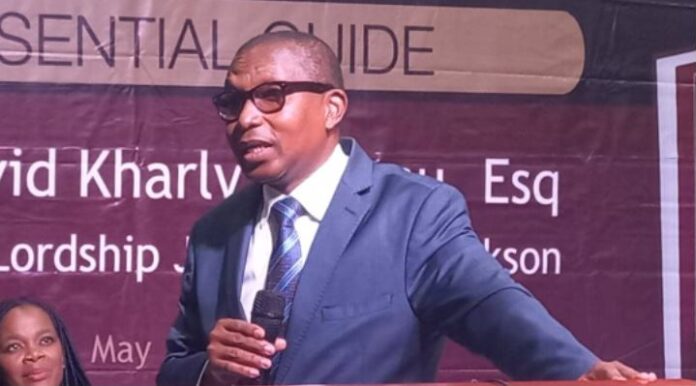 A Justice of the Labour Division of the Accra High Court, Justice Frank Aboadwe Rockson has observed that employees do not have trust in the National Labour Commission.

Justice Aboadwe Rockson, a labour expert who has been adjudicating cases of Labour unrest, notably being the recent UTAG vs NLC impasse noted that the Commission is perceived to be in bed with government.

Speaking at the launch of a book titled ‘Labour Law in Ghana: An Essential Guide’, Justice Aboadwe Rockson said the Commission is seen as not being independent with its functions.

“The other observation has to do with the Labour Commission, particularly with the functions and independence of the Labour Commission. I have realised that they are not trusted. They are seen as an institution or commission that is in bed with the government,” Justice Aboadwe Rockson who authored the Forward of the book observed.

The High Court judge also observed that employees do not pay attention to terms in their contract manuals, a development he said has led to several labour disputes in court.

According to Justice Aboadwe Rockson, if the terms in employee contracts are adhered to, the multiplicity of Labour cases in court would have been reduced.

“I have observed that employees usually do not follow what is in their contract of employment, the CBA, the manual and at the end of the day, most of these issues come before me (in court).

“If they really adhere to what is in the terms of the contract, some of the disagreements will not even come to court. This makes the parties not have trust in those bodies.

“There are some terms in their manuals and contracts where if there is some dispute or if a person has been dismissed or there is contract termination, there are some mechanisms in there that, they could use to seek redress,” he noted.

He said, but “because there is that lack of trust, they (parties) circumvent that and come to court.”

The Rector of the MountCrest University College (MCU), Lawyer Irene Ansa-Asare who chaired the event said, the book is written in a manner that appeals to every discipline.

“The book Labour Law in Ghana, is an essential guide and everybody needs the text and once I looked through it, I realised why it will be in everybody’s bookshop.

“It is written in such a way that, it appeals to everybody. It is simple enough for students to understand. It is comprehensive enough for lecturers to use. It is practical enough for HR managers to have as their daily guide and it cuts across all disciplines,” she stated.

The Author of the book, David Kharly Hodanu Esq., a Principal State Attorney at the Attorney-General Department said, the materials contained in the book have been tried and tested and it is capable of resolving labour-related issues.

“Some of you may be wondering what at all is in this book and whether you need to own a copy. To such persons, I say that the materials contained in this book have been tried and tested and have been found capable of helping you resolve any labour-related issue you may have on your hand as a lawyer, as a judge, as a law lecturer or student, as an HR Professional, as an employer, as an employee, as a trade union leader, as a journalist and what have you.

He added that “the materials contained in this book have been tested in the courtroom (in the High Court and Court of Appeal) and the classroom and have proven to be very effectual.”

The review of the 24-chapter book on behalf of Justice Sir Dennis Dominic Adjei, A Justice of the Court of Appeal said, one striking feature of the book is that the author explains the law in a very simple and straightforward manner which makes it impressively user friendly.