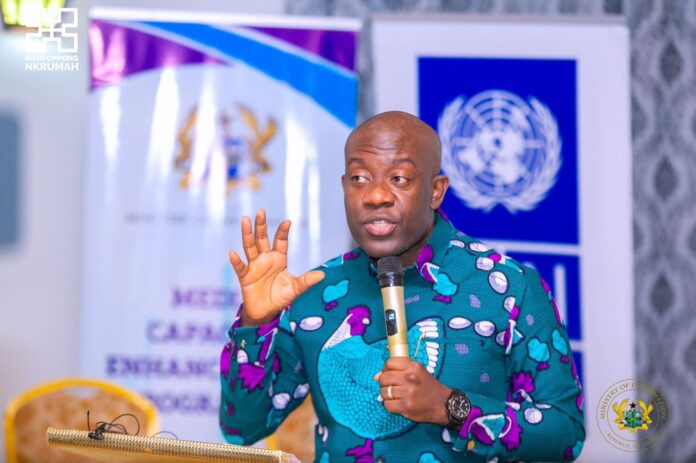 Minister for Information, Kojo Oppong Nkrumah has called on media houses in the country to consider syndication as a means of improving their market potential and commercial viability.

According to him, the opening up of the media landscape has led to the creation of hundreds of media houses many of which are not economically viable. The former broadcast journalist says smaller media houses combining their market shares to create a larger footprint for programming can command significant revenues with which they can pay their journalists better.

“As more and more media houses open, the reality on the other side is that the commercial market for media operations is not expanding that much. What it means is that more and more of these media stations are fighting for the same revenue.

“So right from the onset, one of the things I want to encourage you to do is to explore ways to syndicate the radio station with other likeminded stations in the region or across the country to tap into the market potential of those stations so as to grow the listenership of the station and be financially viable,” he added.

He was speaking at the opening of Oil City Radio, a new radio station in Takoradi in the Western Region on Monday, May 30, 2022.

The highest contributor to Ghana’s low ranking in the new framework for measuring press freedom according to the Reporters Without Border (RSF) 2022 World Press Freedom Index is the poor economic state of media houses and journalists.

According to the report, economic factors greatly influences media work in Ghana. Poor salaries for journalists and the lack of financial sustainability of some media houses make a number of media houses economically less viable.

This the Minister suggested that to remedy the problem, it is important for media houses to consider syndication of programs and revenues across multiple platforms to assure the financial viability of some struggling media houses and therefore assure the freedom of the journalists to do their work without financial inducements.

The newly opened radio station is expected to serve Kwesimintsim, Apremodo, Anaji, Airport Ridge among other communities to educate and sensitize locals on the development agenda of the regional administration and project business opportunities in these areas.