Mr. Arnold Appiah is the President of the NDC Pro Forum but has been suspended by the party. 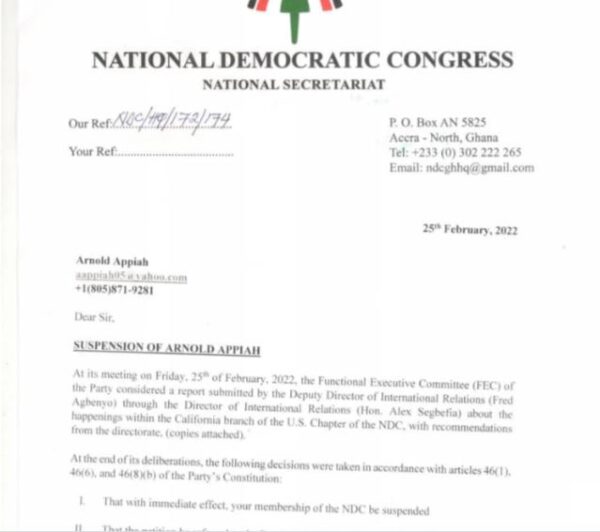 Last week, Mr. Arnold Appiah led the USA NDC pro team for a 3-day seminar that was organized in Kumasi under the auspices of former President Mahama and the NDC scribe General Mosquito and donated 1500 dollars to the party.

This situation I see as very disturbing in terms of party discipline. Truth be told the current condition of Ghana’s main opposition party is virtually moving from a party of ‘pride to a party of one-man show. If it’s not John Mahama then nobody. If the Great NDC party wants to succeed with the desire to make any headway in our electoral process for us to be serious as a party, this song of Nobody should contest John Mahama should stop. Political vultures who want to prey even on very good candidates in the same party. We are fast becoming a shadow of ourselves.

The NDC must tell Mr. Ofosu Ampofo and their onlookers that -NDC is about foundation, systems, and structures. So, they should respect it.

As things stand now, the NDC remains One of Africa’s most reliable and respected political parties and the last hope of the common man to rise from growing poverty.

Currently under the leadership of Ofosu Ampofu, the National Democratic Congress (NDC) is lost in depression and suffering from a post-traumatic stress disorder, (PTSD)” Under him. He cannot question suspended members who attend party programmes.

If the party continues to be held hostage by a few major donors, it will continue to find it difficult to instill the values that will endear us as Ghanaians.

Ghanaians need reassurance that repositioning and rebranding the NDC platform remains the best political vehicle to return Ghana to the path of good governance and national unity.

We are a party of committed servants of the people. You must let our people see once again that we are in this to serve and to move Ghana forward, not to move Ghana backward.

The NDC must be aggregating opinions of its members and Ghanaians at large on the way forward so that we perfect a level playing ground “as no individual or group can claim ownership or control of the party.

Under Samuel Ofosu Ampofu, the party is gradually coming under the control of certain individuals, who are exhibiting dangerous levels of undemocratic behaviors. One of the biggest challenges that the NDC faces is balancing its needs for funding with established egalitarian values and internal systems.

We are not in a moment of psychiatric seizure, sad to say, Perfidious!

Perfidious!! Perfidious that is what we are virtually becoming.

We are seeing the entry of a pugnacious phase of the NDC Presidential primaries in Ghana. We are watching with sneering disdain how the rapacious and scavenging variants, can form a wicked confederacy of adversarial fraternity to stop others from contesting in Democratic Party primaries. Look at what they have started doing to Great Statesmen like Dr. Kwabena Duffuor.

Our democracy is now going Gothic where the twin evil of greed and revolting selfishness continues to drive public service and citizen engagement.

We are also seeing the evolution of the barbarians trying to fight the virtuous and seek shelter under the leaky umbrella that we are rebranding.

Most of the political assassins are hiding under the name ONE MAN SHOW tickets are ungracious, ungrateful, boorish, ignorant, bullies, and dangerous to our democracy.

They want to throw dirt at everyone who wants to contest on the NDC ticket for the Presidential primaries. Something I see as nothing but a byword for desperation and disruption.

As members of this rogue gallery have, through sheer arrogance and cavalier insolence, pronounced annus horribilis over other contestants.

All they know is that the NDC is their Imperial Rome that must be taken back by all means it’s their personal property.

There is no integrity capital among members of these noonday cowards, who, in their whimsical calculations, the Majority of the NDC members are seen as fools who have no memory of how the party grassroots members were sidelined for some few celebrities and their favorites.

As the race for 2024 heats up, therefore, the NDC must concern themselves with three main things: building parties in which the will of the people is supreme; properly defining the character of the Party.

NB: Views expressed by the author are entirely his and do not represent the position of Kasapafmonline.com