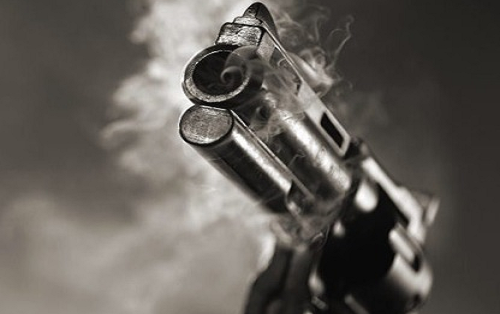 The wife of the brother of the District Chief Executive for Kwahu Afram Plains South has been shot dead by her debtor.

The sad incident happened last Saturday when the debtor allegedly invited the woman (deceased) to his farm in a village called Iddrisu Akuraa around Kronteng-Krachi in the Kwahu Afram Plains South District to buy yam.

According to Evans Kyei Ntiri, the deceased Akosua Esi was a yam trader at Maame Krobo market who usually buys in bulk from farmers around the villages and towns in the Afram Plains North and South Districts and the Sekyere Afram Plains area.

Evans Kyei Ntiri speaking to Morning Show host, Obaahemaa Yaa Mirekua said the suspect has been arrested and he’s in the custody of the Afram Plains South District Police Command assisting in an investigation.

“It is true, my brother’s wife who is also my wife was a yam trader who buys yam from about 70% of the farmers in the Afram plains area but according to my senior brother, the wife informed him about three (3) weeks ago that one of his debtors has called her to come for yam, so she went with one guy who rides motor. He said the wife told him they returned home upon hearing a gunshot after several attempts to reach the farmer proved futile.”

Evans continued that his brother further said, “they went for the second time after the farmer called and said they lost the path to his farm and asked Akosua Esi to buy him weedicides when coming adding that, all attempts to reach the farmer failed once again.

However, he said, “the debtor succeeded in his plans to get rid of Esi after they (the farmer and Esi) agreed to meet last Saturday when he shot Esi and her motor rider to death instantly on their way to his farm.”

The DCE also added that the Afram Plains South District Police Command and the Eastern Regional Police Command together with the youth in the area arrested the suspect and also said the suspect confirmed committing the crime when he was questioned by the police.

“The Inspector-General of police upon hearing the incident sent the Eastern Regional police commander and his team to visit and console the families of the deceased yesterday”, he said.

The bodies of Akosua Esi and the motor Rider who is in his early 20s have been deposited at the Donkorkrom Presbyterian Hospital Morgue.