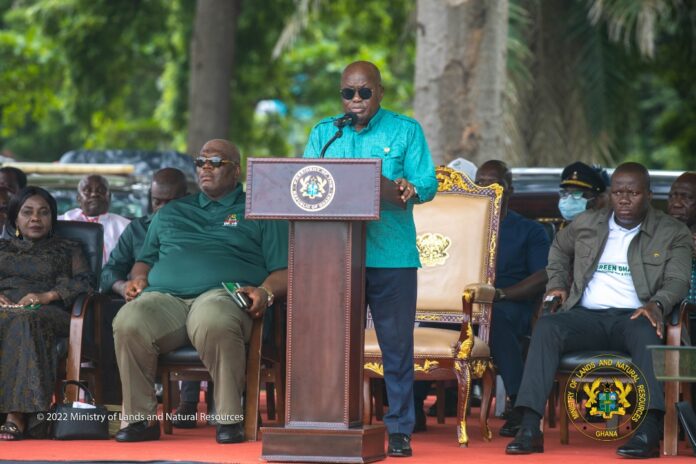 resident Nana Addo Dankwa Akufo-Addo has led the country in a nationwide tree planting exercise under the Green Ghana Project.

Speaking at a tree-planting ceremony at the Efua Sutherland Park in Accra to kick start the nationwide exercise, the President said the target, this year, is to plant twenty million (20,000,000) trees across the country in both Forest Reserves and off forest reserves.

The Green Ghana Project was launched, last year, by the President as part of an aggressive afforestation and reforestation project, to restore the lost forest cover of the country and contribute to global efforts against climate change. 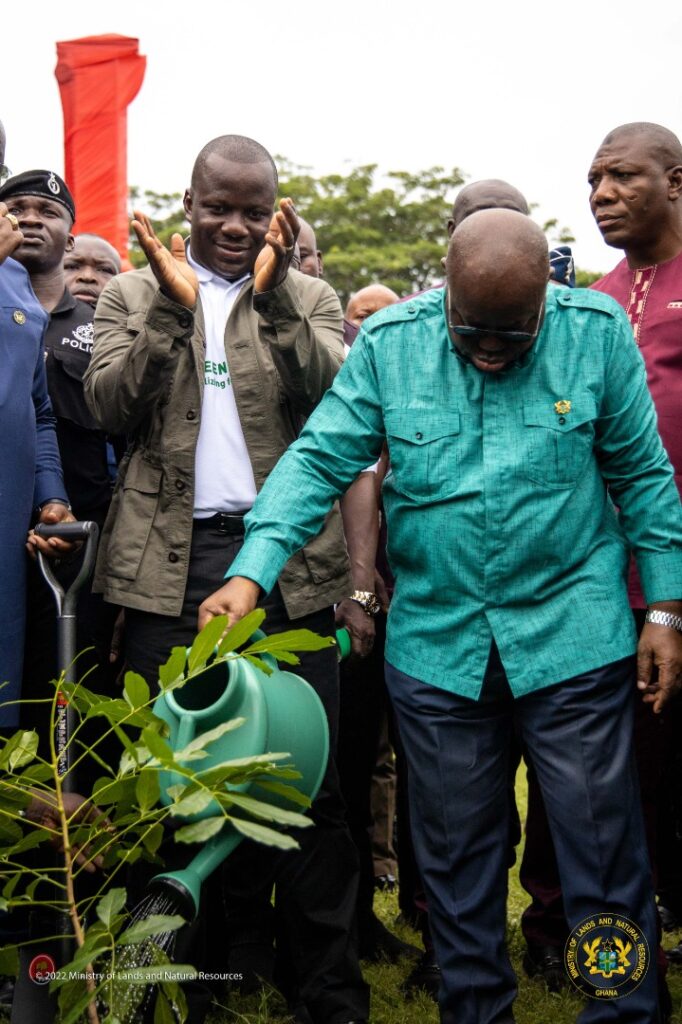 This year’s edition of the Green Ghana Day was launched by the President on March 1, 2022, under the theme, “Mobilising for a Greener Ghana,” where he designated June 10, as the Green Ghana Day. Speaking at the tree planting exercise today, the President said trees are necessary for our survival and the survival of the planet and called on everybody living in Ghana to join the tree planting exercise.

He said over 1.6 billion people across the world, and about eighty-five per cent (85%) of the Ghanaian population depend on forest resources for their livelihood, and to satisfy their socio-cultural needs. They also provide water, food, oxygen, and mitigate climate change to provide us with a liveable climate.

The President bemoaned the rate at which the world’s forests are being depleted. He said in the last three decades alone, the world has lost about four hundred and twenty million hectares (420,000,000ha) of the forest, more than ten per cent (10%) of the current total forest area of the world. According to current statistics, the world loses 150 acres of rainforest every minute, 200,000 acres every day and 79,000,000 acres every year. He said Ghana has lost over 100,000 acres of her forest in the last decade alone, and this has seriously affected the timber industry. 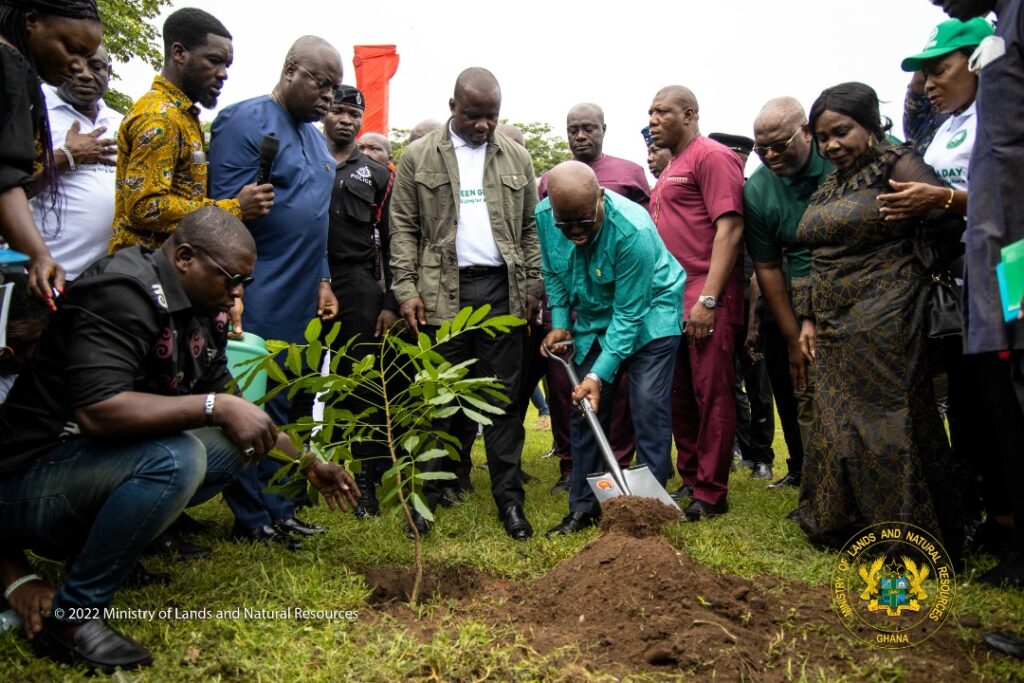 Touching on the importance of forests to climate action, the President said nature-based solutions provide a quick means to halting climate change, with global warming projected to reach 3.2 degrees Celsius if no action is taken. He commended the Minister for Lands and Natural Resources, and Member of Parliament for Damongo, Hon. Samuel A. Jinapor, for leading Government’s aggressive afforestation and reforestation programme.

On his part, the Minister thanked the President for initiating the Green Ghana Project. He said due to the importance of forests, the Ministry of Lands and Natural Resources has adopted a two-pronged approach to protect and manage the forest and wildlife resources of the country, that is, halting deforestation and embarking on aggressive afforestation and reforestation programme.

The Minister said policies such as the ban on the trade in Rosewood, the ban on reconnaissance, prospecting and exploration in Forest Reserves are all geared toward halting deforestation. This is being done with policy and legislative reforms, including, the introduction of the new Wildlife Bill, implementation of the Forest Law Enforcement Governance and Trade (FLEGT) Action Plan, as well as the conversion of timber concessions to TUCs.

On afforestation and reforestation, the Minister said 547,891.70 hectares of degraded forest has been cultivated since 2017, in addition to 87 hectares of Rosewood planted by the Forestry Commission, 407 hectares cultivated by the Forest Plantation Development Fund, and reclamation being done by the National Alternative Employment and Livelihood Programme, and the Ghana Landscape Restoration and Small Scale Mining Project. 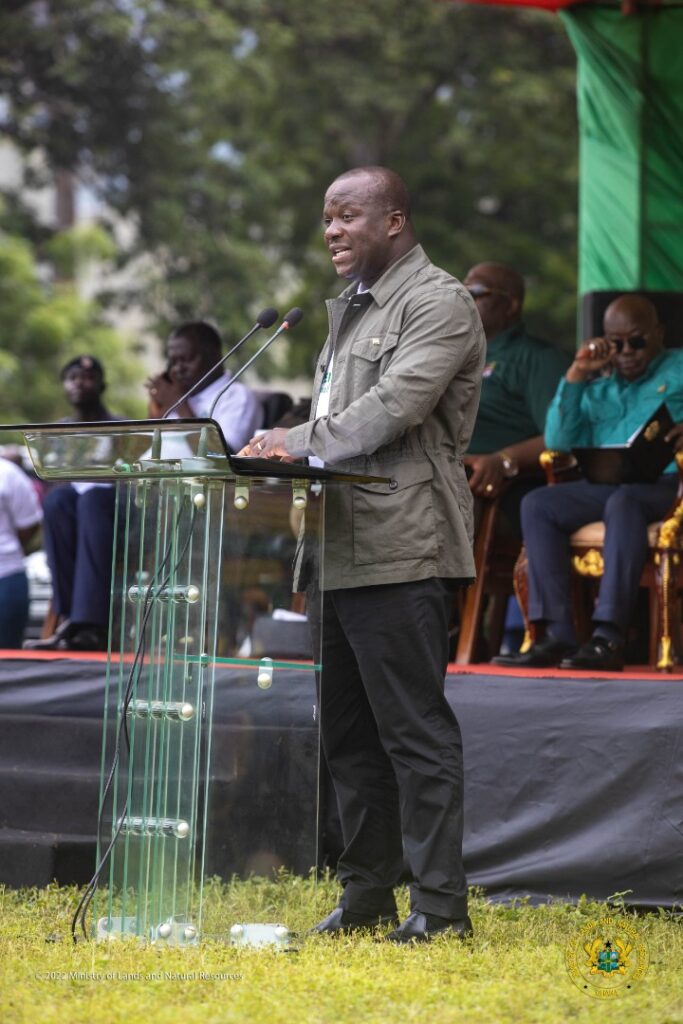 The Minister said Government has, since 2018, planted 123.2 hectares in the Achimota Forest, through the Youth in Afforestation Programme. He said he will join the diplomatic community to plant more trees in the Achimota Forest, which is largely degraded.
He thanked all those who had supported the Project to date and called on all people living in Ghana to support the project.

After witnessing the President’s planting at the Efua Sutherland Park, the Minister joined the diplomatic community to plant at the Achimota Forest.