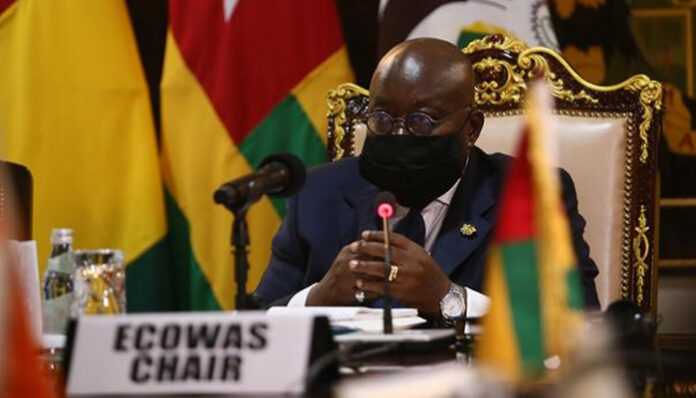 Ghana will host the 61st Ordinary Session of the Authority of the ECOWAS Heads of State and Government in Accra on July 3, 2022 at the Kempinski Gold Coast Hotel.

The Summit will mark the end of the second-year stewardship of President Akufo-Addo.

President Nana Addo Dankwa Akufo-Addo, who is also the Chair of the Authority of the ECOWAS Heads of State and Government will host his colleagues 12 ECOWAS member states.

President Akufo-Addo assumed the Chairmanship of ECOWAS on September 7, 2020 in Niamey, Niger after Mahamadou Issoufou, former President of Niger, had ended his stewardship.

In June, 2021, the mandate of President Akufo-Addo was renewed by his peers for another one year based on his sterling leadership and to complete ongoing institutional reforms geared towards the reduction of the number of Statutory Appointees of the ECOWAS Commission from Fifteen (15) to Seven (7) as well as streamline operational cost.

Among many others, the Summit would be dedicated to examining and taking decisions on the political, security and humanitarian situations in the Region.

Most notably, the Summit shall review the current state of affairs in Mali, Guinea and Burkina Faso, suspended from the organisation, following the unconstitutional changes of government in the three countries.

The Mediation and Security Council Meeting shall provide updates on the political developments in the region, especially in Mali, Guinea and Burkina Faso, as well as, in the Sahel Region.

They would also provide updates on the overall climate of insecurity, challenges relating to youth unemployment and the impact of diseases and pandemics on social tensions in the Region.

Ms Ayorkor Botchwey will also host her colleagues and Finance Ministers on Thursday, June 30, 2022 and Friday, July 1, 2022 in the ECOWAS Council of Ministers Meeting to, among others, discuss and make recommendations on the finance, administration, as well as, the programmes and activities of the ECOWAS institutions to the Authority of the ECOWAS Heads of State and Government for adoption.