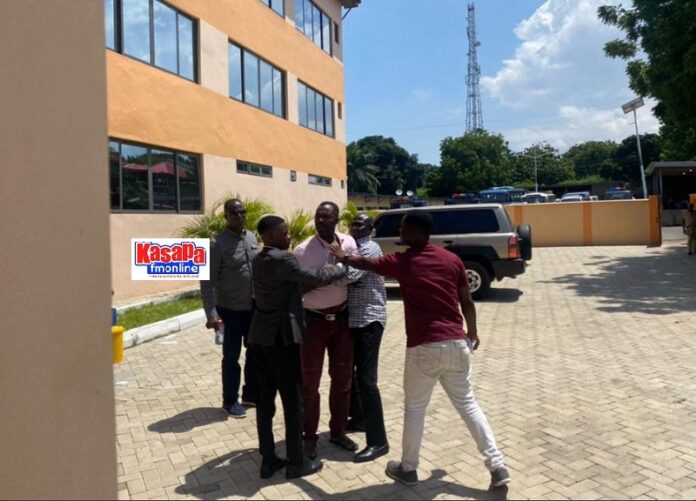 There was drama at the District Court (Domestic Violence and Victims Support Unit) in Accra when Evans Oppong Kyekyeku, the businessman arrested for attempting to use his 11-year-old daughter for money ritual nearly assaulted journalists after the court had declined him bail.

Evans Oppong Kyekyeku is on a provisional charge of Preparation to commit crime to wit; murder and his plea has been reserved.

In court on Monday, moments after his bail application was declined, the accused person nearly pounced on EIB Network’s Court Correspondent Murtala Inusah who was in court to cover proceedings.

“Why are you taking pictures of me. Are you stupid,” the accused person who was in handcuffed nearly whisked himself away to pounce on the journalist.

But for the timely intervention of the police officers escorting him, he would have had his way out.

Another of the sympathisers yells; “You can’t do this in Europe.”

Meanwhile, the Court presided over by Her Worship Ama Adomako Kwakye while declining the bail said, there has not been any unreasonably delay in the matter.

The court also said it does not see that the facts do not support the charge as per the prayer by counsel for the accused Ralph Agyepong.

Her Worship Ama Adomako Kwakye directed them to go to the High Court should they wish.

The prosecutor chief Inspector Richard Amoah had told the court that, though they have carried out some investigation, they are yet to have it completed.

He however prayed the court to grant them an adjournment to enable them prepare the duplicate case docket for the Attorney-General Department for advice.

The prosecutor said the charge against the 47-year-old Machine operator who is also a father of 12 is a first-degree felony case which will require committal.

Oppong Kyekyeku Oppong who was arrested on June 3, was making his second appearance in court.