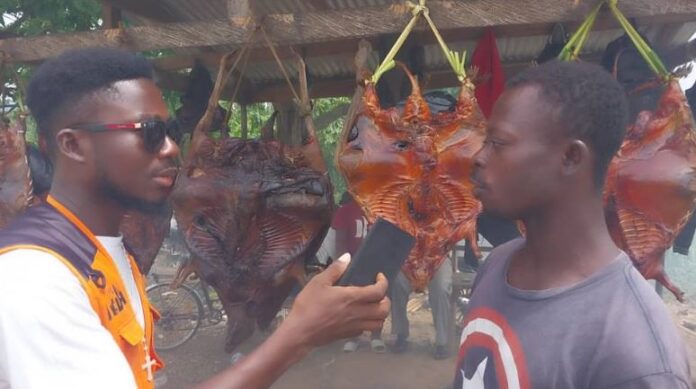 Some hunters and youth who sell bush meat at Anyinam in the Atiwa East District of the Eastern Region have expressed worry over reports surrounding the cause of Ebola and Monkey Pox diseases.

According to them, bush animals eat grass/leaves to stay healthy adding that it isn’t possible for one to be affected by such diseases.

Speaking to Agoo News, the hunters bemoaned the rate at which such report affect their businesses urging the researchers to come again.

Research has indicated that MonkeyPox can be caught from infected rodents, such as rats, mice, and squirrels in parts of West and Central Africa. One could also catch monkeypox from infected animals if you’re bitten or touch its blood, body fluids, spots, blisters, or scabs.

Moreover, it has been noted that Monkeypox can be caught by eating infected animals in the bush that have not been cooked thoroughly, or by touching other products from infected animals such as animal skin or fur.

In addition, Scientists think people are initially infected with Ebola virus through contact with infected animals such as fruit bats or nonhuman primates.

In Ghana, the most successful Chop Bars cannot be operated without bush meats. Hunters and some youth also take advantage of the situation by selling on the roadside or to some restaurants and bars.

Anyinam is known as one of the most renowned places where these bush meets could be found as a youth in the area buy, prepare them nicely for sale.

Following research surrounding these animals over MonkeyPox and Ebola, the youth have however urged the scientists to do more research.