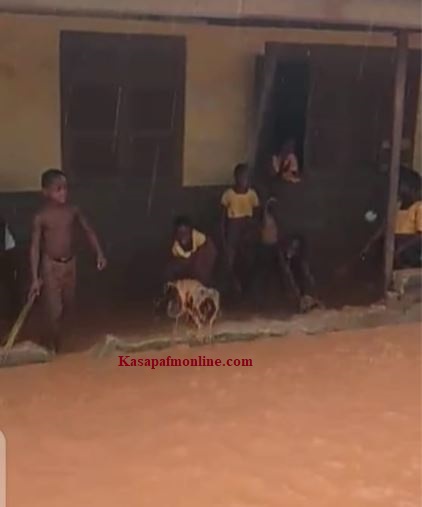 Three Pupil of Moree D/A Basic School in the Abura Asebu Kwamankese District escaped death after water washed them while playing in flood water after heavy rains on Wednesday, June 15.

Information gathered by Kasapa FM news Yaw Boagyan revealed that these pupils were in the Classroom when the flood water broke boundaries and entered their Classroom.

They were sent to the community Clinic for treatment and later sent home.

The whole school from Kindergarten to Junior high school was inundated with water, compelling some of the kids to be rushed to nearby houses to avoid being washed away.

Meanwhile, most parts of Cape Coast and its environment including the University of Cape Coast to Elmina Highway, some parts of Elmina were heavily flooded.

Schools at Moree and its environment were closed early due to heavy flooding.

Residents of Moree are therefore calling the Member of Parliament for Abura Asebu Kwamankese Constituency Hon. Elvis Moris Donkor to support the school to be renovated and also get pavement to prevent the school from excessive flooding.