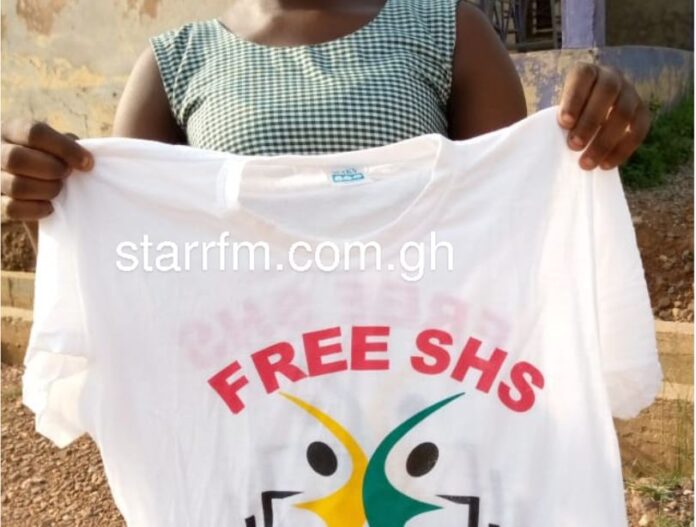 Starrfm.com.gh has uncovered bulk printing of Free SHS branded T-shirts for distribution to
about 1,274,412 students currently in schools across the country.

The T-shirts are being procured by the Free Senior High School Secretariat at the office of the Presidency.

The cost of procuring the shirts has not been disclosed but the average cost of Printing a T-shirt in Ghana ranges between Ghc20 to Ghc60 each depending on the quality but with discount based on the number of printing.

According to the Ministry of Education, currently, there are 827,193 continuing students in the second and third-year SHSs.

According to the ministry, an estimated 447,219 first-year students had so far enrolled this academic year.

Using average printing price of Ghc30 per T-shirt, the Free SHS t-shirts to be shared for the about 1,274,412 students currently in school means government is spending about Ghc38,232,360.

Starr News Eastern Regional Correspondent Kojo Ansah has established that so far 41,215 pieces of the t-shirts have been distributed to about 100 public second cycle institutions in the Eastern region including Technical and Vocational Education Training institutions

Each school had 416 as first consignment as more of the T-shirts are expected to arrive for distribution.

However, when contacted,the Public Relations Officer for Ghana Education Service at the Eastern Regional Education Directorate, Asiedu Acheampong, denied knowledge of distribution of such t-shirts to any school.

He said “what I am aware of is branded Cardigan of the various schools but for free SHS t-shirts I am not aware so if you can send a picture of it to me and the name of the school you took the pictures from”.

Not convinced by the explanation by the PRO, Kojo Ansah approached the Regional Supply officer at the Regional Directorate of GES, Daniel Ayertey, why he is distributing Free SHS branded T-shirts which according to the PRO GES has not sanctioned, Mr Aryertey shocked by the statement of the PRO placed a phone call to him.

He later explained that, the t-shirts were brought from Free SHS Secretariat late last year to be distributed to the students free of charge.

He said the region received 41,215 pieces as the first consignment but because the stores are full, decided to release it to the schools to use their discretion to share to the students as they await the other consignment.

However, some headmasters and teachers told Starr News even though the t-shirts are free for the students the printing cost is not free.

They said the cost of printing the t-shirts could be used to make part payment of arrears owned the schools by the government.

The introduction of free SHS policy has increased average enrolment in SHSs from about 800,000 in 2015 to 1.2 million in 2021, with the double-track system.

The Free SHS programme since its inception has been financed from the Annual Budget Funding Amount (ABFA) of petroleum revenues and the general government coffers or the Consolidated Fund.

However, the policy has been bedevilled by financial challenges and delay in supply of food to the schools making it difficult for heads of second-cycle institutions to run the schools smoothly.

‘Free SHS is putting a strain on national budget’ – Otumfuo