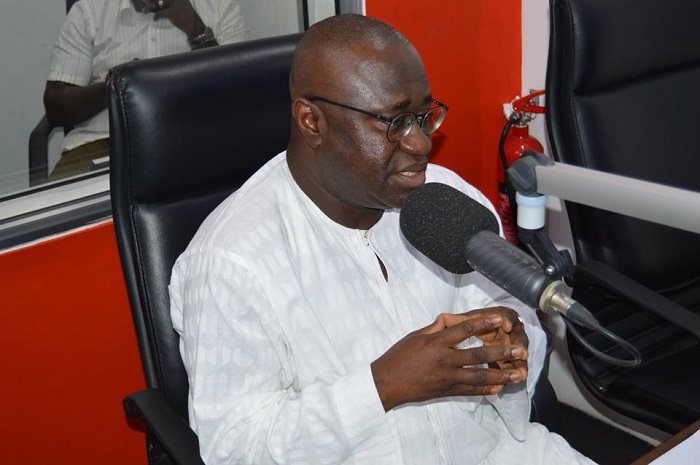 The Faculty of Academic Affairs & Research director at the Kofi Annan International Peacekeeping Training Centre (KAIPTC) has praised former President Mahama for being tolerant of divergent views during his tenure.

According to Prof. Kwesi Aning, he could vociferously criticise the former President and still sleep soundly after such critiques.

Speaking at the John Evans Atta Mills Memorial Lecture for Central and Western Regions, he indicated that general security was about being tolerant of different forms and ideas of the diversity of opinions, and the former President was an embodiment of such descriptions.

He stated, “And here, I want to celebrate and salute former President John Mahama. I criticised him, and he knows it. I never spared him. But I also slept soundly.

“I criticised the former president so much that every time he came to the Kofi Annan Peacekeeping Training Centre, he said, ‘Let me see if Kwesi is there so that I can recognise him, so he doesn’t criticise me’. So, thank you very much.”

Prof. Aning emphasised that a lot needs to be done for the state to achieve proper security.

He argued that the statutory security institutions in the country must be responsive to the public and be transparent.

He asserted that the nation’s security forces have fallen short of protecting its citizens, adding that they now instil greater fear among them. He cited the Ejura, Nkoransa, and most recent national protests as examples.

“True security is for the farmer to wake up at 4 am and go to the farm without fear. Proper security is about our mothers leaving at about 2:30 am, travelling 300 kilometres to go and shop, knowing they will get to that market and return home.

“True security is about ensuring that you can walk up to a police officer and say I am lost, and he will not say, “how much would you want to pay,” he quizzed.

The director of Academic Affairs of the KAIPTC said proper security is about ensuring that people are not stopped and harassed on the highways and money is demanded from them, even when there is no basis for such intimidation.

He reiterated that proper security is when one has a complaint, and when the complaint is done, the complainant feels that something has been done about it.

Speaking of the late President’s virtues, he hinted that what he had learned from Professor Mills concerned the complex relationship between the law and providing dialogic, consensual, engaging, and discourse-friendly security.

He was convinced that the challenge of security guidelines is about restoring the fundamental values of those security institutions and ensuring their sustenance through autonomous watchdog institutions.

“As democracy is distinct from autocracy, governance should be society-centred, including the private sector and, more critically, civil society.”

These are necessary to maintain societal, economic, and human development.

He said that governance, which is the exercise of political, economic, and administrative authority, must manage diversity and be tolerant of diversity, criticism, and alternative viewpoints.

Professor Aning continued by arguing that transparent, participatory governance is essential for the public to engage with, question, and hold elected officials accountable.

Professor Mills stood out in all of this.

The collaboration between the government, security agencies, the private sector, and civil society is therefore important to ensure and fight for, he continued.

In a society like the one we have in Ghana, governance should be centred on the needs of the people, ensuring that civil societies encourage participation from various groups in all aspects of our activities.

Prof. Aning urged the J.E.A. Mills Memorial Heritage board to begin compiling every piece of information about Professor Mills.

He explained that to make these writings accessible, a presidential connection must be established.

“It is essential and crucial that these writings serve as the foundation for knowledge creation and dissemination, as doing so will be the best way to protect his legacy from encroachment.

“Secondly, the fight to appropriate Professor Mills’ legacy has already started, and their persistent deliberate efforts as misrepresenting and misinterpreting his words,” he said.

The 2020 running mate of the NDC added that the move underscored his faith in the youth as the country’s future.

Prof Jane emphasised the passion of Prof Atta Mills for the profitable tangible project with intangible results for the country’s good, especially the youth.

She continued by saying that Professor Atta Mills had contributed significantly to realising the University of Cape Coast’s long-held goal of opening a medical school.

“I wonder where the School of Medical Sciences at UCC would have been without you,” she said.

“The doctors who graduated from the medical school are now attending to the nation’s health needs,” she added.