Young female Nigerians are being trafficked to Ghana for sexual exploitation through the conspiracy of some Ghanaians and Nigerians under the pretext of securing decent and well paying jobs for them in Ghana.

Ghana’s Eastern Regional capital Koforidua and some major cities in have been flooded by these sex trafficked victims from Nigeria.

EIB -Newtork’s Eastern Regional Correspondent Kojo Ansah has been investigating some of these sex trafficking cases in Koforidua, the capital of the Eastern region of Ghana.

The Bula Spot and Little Ben shoes facilities are the two most notorious brothels in Koforidua occupied by an estimated seventy (70) trafficked girls from Nigeria.

The owners of these two places rent out the facilities to the sex traffickers to accommodate their victims and use same as brothels. 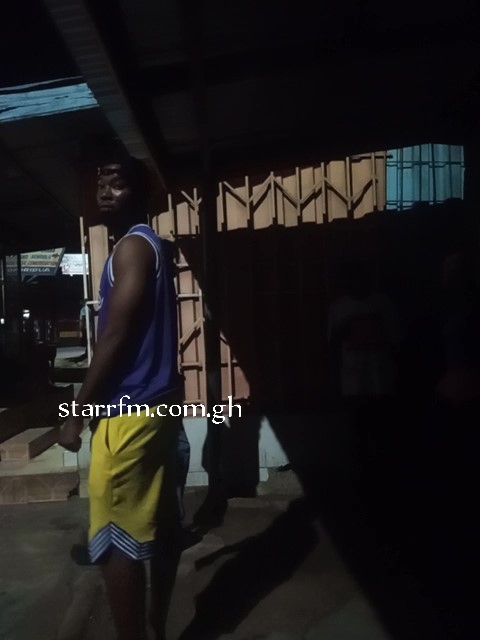 Girls with ages as low as 16 are trafficked to these two brothels under the guise of working in restaurants, hotels , shopping malls among others only to be forced into prostitution upon arrival.

They are sexually exploited for at least three to four months to repay all travel expenses and other cost before given freedom to operate on their own.

The victims are confined in these brothels and policed by bouncers hired by the traffickers.

The bouncers escort any of the victims whenever granted permission to go out for something pressing. This is to prevent them from escaping or speaking to strangers.

The victims are forced to sleep during the day time and work at night when clients solicit for sexual intercourse in exchange for cash.

These two brothels located in the heart of Koforidua have many cubicles where these trafficked girls sexually satisfy their clients at varied fees ranging from Ghc30 per round of sexual intercourse.

“For sleep, give me Ghc300 but short is Ghc30 edis” one of the trafficked girls said.

The traffickers do not allow the victims to be taken away by clients, however, one may be allowed under special arrangement of paying at least Ghc300 plus Ghc50 for a bouncer who will police the victim to wherever she will be taken to.

Monies accrued are paid to the traffickers whom they call “madam”.

It is 11:00pm Wednesday March 23,2022 in Koforidua while many workers are asleep, these trafficked girls are awake standing in front of the brothels enticing men to patronize their sexual services.

One of the trafficked girls ,Traijel , told me she arrived in Ghana three weeks ago through an agent who said she had secured a job for her only to be forced into prostitution.

She had been addicted to drinking alcohol and smoking cigarette to enable her sleep with at least five men per night.

Traijel introduced , Akosua Dadzie as her “madam” to wit a trafficker who received her in Ghana.

Akosua Dadzie, a Ghanaian, says she has four of these trafficked girls working for her .Akosua Dadzie is not a resident of Koforidua, rather from Accra.

Some of the victims unable to endure the ordeal of sexual exploitation escape.

Journalist: I want to take one of your girls away, I don’t feel comfortable to sleep with her here at the brothel. But she said she wouldn’t go unless I speak to you

Finally, Ghc300 plus Ghc50 for bouncer to guard the victim to the hotel and bring her back to the brothel was agreed on.

She said “many married men come here to patronize their service .They mostly sleep with them here .The place is not ghetto room”.

Akosua welcomed pretentious proposal to traffick some girls from the village to her for commercial sex exploitation.

“I like the bad girls more because they know much about sex .When they come they will serve for four months. After which they will be independent”.

The investigations uncovered a harrowing condition of trafficked Nigerian girl, Somtooma (not her real name ). Her National Health Insurance card indicates she was born on September 5,2001.

The 20 year old girl was trafficked to Ghana and forced into commercial sex activity however got impregnated, infected with HIV and thrown out to the street .

A good Samaritan Ibrahim Amavor who is also Islamic radio preacher went to the rescue of then hunger-stricken six-month pregnant victim. 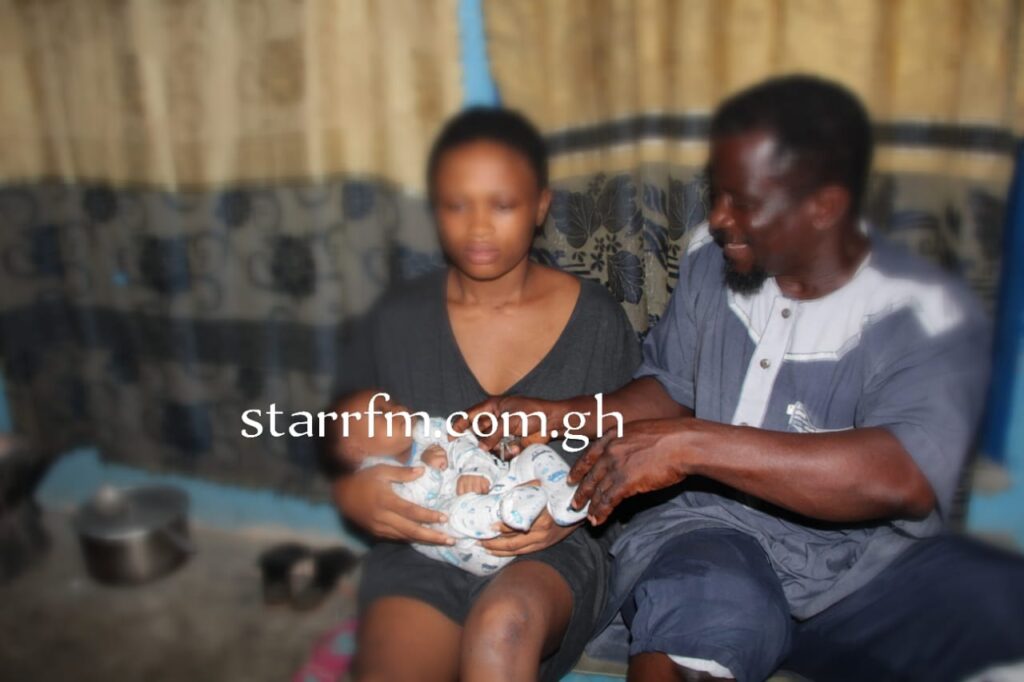 “It came to a point every evening whenever I’m going to town from 6:30 to 7 pm ,I saw this girl sitting at the traffic on a bench for two weeks wearing same dress so it kicked my heart to get closer to her. When I got close to her I started to interview her to find out what was her problem was but I noticed she was pregnant …..she told me doesn’t have any place later she told me they are living in one house behind Normal technical. She told me she was hungry so I brought her home, and gave her food so she stayed with me for a while up to 9:30pm when I escorted her to go home.The following day I went to the house to look for her then they told me she is no more living there..a week after, she called me around 9:30pm and said she was in town at total 2” Amevor narrated.

He continued that , “At the time I met her she was 6 months to 7 months Pregnant .. I asked her where her antenatal card was she told me she doesn’t have .I sent her to the Alata chief but he was very sick so they directed me to Ebo chairman. I went there but he told me he can’t handle it so he gave me a number to call and see the representative of the Nigeria Ambassador in Eastern region so I went to him I explained everything to him with the girl as well and he told me that I should go that he will see us later after discussing the matter in a meeting But he never showed up.

Ibrahim Amevor further said “I consulted one of my legal practitioner and she told me to report to police so I reported and wrote my statement. She gave us her mother’s number to call her but when we called the mother in Nigeria the mother sounded as poor helpless woman. According to the girl if you reach Lagos you will take another bus spend the night before you reach her hometown .

On April 31,2022 , the victim gave birth through Cesarean delivery at the Eastern Regional Hospital but suffered severe puerperal psychosis.

“They admitted us almost one week at the hospital then they discharged us ,even the medical bill was a problem but some benevolent people they helped. After a week she started behaving strangely so I sent her to the hospital but the problem things are not easy what to eat even very difficult.Social welfare couldn’t help us when we went to them”.

Ibrahim Amevor wants the Nigerian High commissioner to Ghana to help rescue and reintegrate many of such sex trafficked girls in Koforidua with their families in Nigeria .

“I am appealing to the Nigeria High Commissioner that there are many things happening on ground. Through this interview I want him to come in so that the child can go back to his family .There many things happening on the ground he can commission some people to come on the ground and see things by themselves before it gets out of hands . Some women have taken upon themselves doing no job but to traffic this young girls .These girls are not from the cities in Nigeria they are from typical villages ”

The Eastern Regional Vice Chairman of Association of Nigerians , Christian Ofor narrated that one of the trafficked girls recently escaped but the Koforidua District Police Command failed to take her statement hence the victim stormed out of the police station and went Accra.

He wants the Ghana Police Service to arrest the kingpins involved in trafficking young girls from Nigeria to Ghana.

US Department of State report on Human Trafficking in Ghana

The Human Trafficking Act prescribes penalties of a minimum of five years’ imprisonment, which were sufficiently stringent and, with respect to sex trafficking, commensurate with those prescribed for other serious crimes, such as rape.

The report pointed out that Government of Ghana does not fully meet the minimum standards for the elimination of trafficking but is making significant efforts to do so.

According to the 2021 US Department of State report , government of Ghana maintained anti-trafficking law enforcement efforts.

However, the 2015 regulations for this Act, which are non-discretionary and have the force of law, provided specific guidance on sentencing depending on the circumstances; in general, the term is not less than five years’ imprisonment and not more than 25 years’ imprisonment, but if a parent, guardian, or other person with parental responsibilities facilitates or engages in trafficking, they are liable to a fine, five to 10 years’ imprisonment, or both. By allowing for a fine in lieu of imprisonment, these penalties were not commensurate with those for other serious crimes, such as rape.

The US Department of State report indicated that, government did not report any investigations, prosecutions, or convictions of government officials allegedly complicit in human trafficking crimes; however, official corruption and complicity in trafficking remained concerns, inhibiting law enforcement action during the year.

Observers alleged that traffickers operated with the support or acquiescence of law enforcement or justice officials, and that some government officials interfered in law enforcement proceedings.

E/R: Carpenter pours acid on boy, 14 for attempting to ease himself at his shop