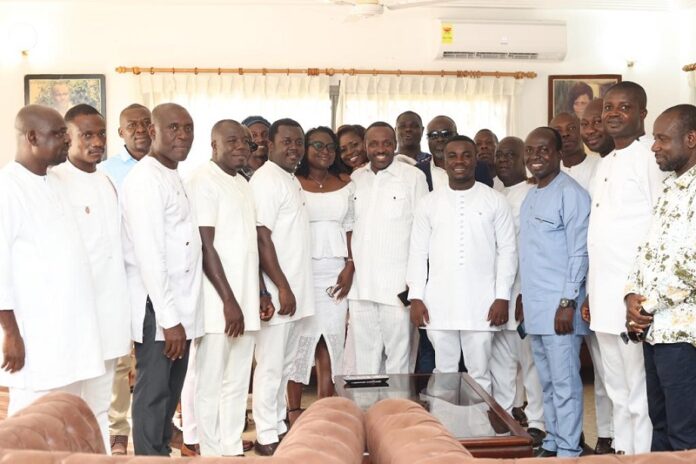 The Metropolitan, Municipal and District Chief Executives of the Central Region have unanimously declared their support for the candidature of Mr. John Boadu, in the upcoming national leadership contest of the New Patriotic Party.

Mr John Boadu is seeking re-election as the General Secretary of the party.

In a meeting at the sidelines of a thanksgiving service held in Assin Jakai, by the newly elected NPP regional executives of the Central Region, the MMDCES contended that any attempt to remove Mr John Boadu from office will spell doom for the party in the General elections to be held in 2024.

The MMDCES who took turns to address the Chief Scribe of the party at the residence of the Regional Chairman, Mr Robert Kutin praised the General Secretary for his depth of knowledge and experience in political strategy.

They conceded that it will take the leadership of Mr John Boadu to break the eight-year cycle of governance by political parties in Ghana.

The need to vote for the retention of Mr John Boadu in office has become a matter of serious consideration by party activists. This is because, there is going to be massive changes in the national leadership of the party, with officers like the National Chairman, 2nd Vice Chairman, National Organiser, National Youth Organiser, and National Treasurer all exiting their current positions.

“The party is at the same time preparing to elect a new presidential candidate who will also select a new running mate. Given all these dynamics, it will be problematic not to have someone like John Boadu in the next leadership of the party.” Said Hon Fiifi Aidoo, the Municipal Chief Executive for Assin Central Municipality.