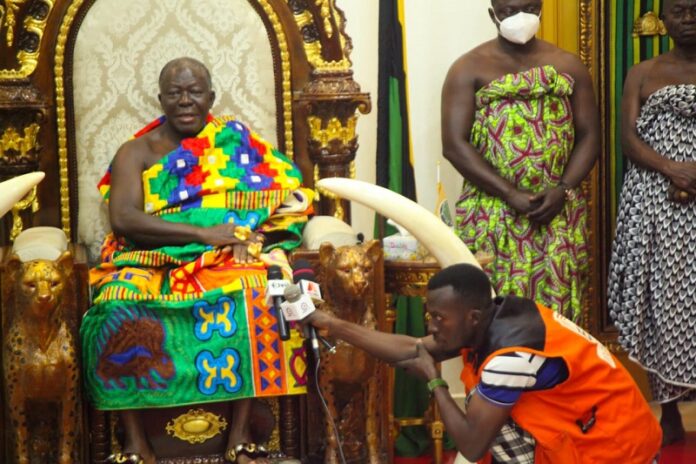 The Asantehene, Otumfuo Osei Tutu II has tasked the Minister for Food and Agriculture, Hon. Dr. Owusu Afriyie Akoto, to do everything within his power to save the country from threats of food crisis in the midst of COVID-19 and the Russian-Ukrainian war.

The King observed that the country, more than ever, would need the Minister and his Ministry to put in place measures that will boost food production and save the people from any imminent threats of hunger.

Addressing the Minister and his entourage at the Manhyia Palace when the Minister paid a courtesy call on him as part of a five-day working visit, the Asanhene praised the Minister for his excellent job during the first four years of the NPP administration, particularly the introduction of the flagship Planting for Food and Jobs initiatives which has ensured that Ghana achieves self-sufficiency in food production and a bread basket for the West African sub-region.

The Minister and his entourage have since Monday, June 13, been on working visits to five regions, namely Ahafo, Bono, Bono East, Ashanti and the Eastern Regions.

Challenges to Government’s Policies and Programmes

The Asantehene in his address stressed that the advent of Covid-19 and recently the Russsian-Ukrainian war have dealt a major blow to governments across the globe, with Ghana, not an exception.

According to him, these two crises have had economic and political consequences, adding that in the case of Ghana, major policies and programmes have been affected as a result.

“The Planting for Food and Jobs programme which you championed was very successful in the first four years, food was in abundance and we were even exporting to neighbouring countries. However, the outbreak of covid-19 and now the war between Russia and Ukraine have had serious consequences on the gains made over the years ” The King observed.

He added “Now Government’s has been seriously affected and these have consequentially impacted farmers and their farming activities, fertilisers and other farming inputs have become very expensive and in some cases not even available. The world is going through serious economic challenges”

The Asantehene noted however that these challenges, notwithstanding, should not be an excuse for government and for that matter the Ministry of Food and Agriculture not to deliver on its mandate to the people of Ghana.

“I am charging you to go and work hard so that Ghanaians can benefit from all the skills you acquired in your academic journey, your competence is not in doubt, you have done it before and I know you will put in place measures to save the country from plundering into food crisis” The Asantehene emphasized.

The King said he was very happy that the Minister and his team decided not to sit in Accra and take reports from their officials but rather have chosen to embark on the working visits to see things for themselves.

“I am happy to learn that you have been to the field to see things for yourselves. This will help you make informed decisions about the way forward in the midst of the challenges” He noted.

The Honourable Minister, on his part, assured the Asantehene and the people of Ghana that despite the global challenges, the country does not face food insecurity.

The Minister said he had observed during the course of his visit that farmers in the country have produced enough to feed the country and even export surpluses to neighbouring countries.

The challenges, according to the Minister, have to do with the recent increases in fuel prices which have pushed the cost of transporting food items from farm gates to the market centres, resulting in hikes in prices of food items.

“Otumfuo I can assure you that farmers in Ghana have worked and continue to work hard in order to ensure there is enough food to consume and even export. From our visits to various fields, we can confidently state that we have an abundant food supply but what the farmers are complaining about is the lack of markets for their produce due to hikes in prices. It is our hope that conditions will normalise so that prices will start coming for Ghanaians to enjoy some relief” the Minister noted.