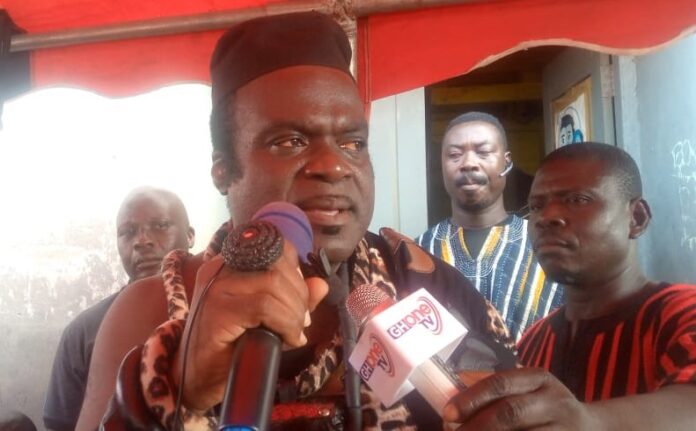 The Paramount Chief of Enyan Abaasa Traditional Area who also doubles as the Vice President for the Central Regional House of Chiefs, Osagyefo Kwame Akonu X has advised Ghanaians especially the Youths to desist from insulting President and other leaders on social media.

According to the chief, most citizens especially the Youths sit in their houses, workplace and other places and insult leaders, a conduct he says is not appropriate and disrespectful.

He said, this behavior must be stopped and respect accorded to Ghanaians Leaders including political leaders and chiefs.

Speaking during the Celebration of Ahobaa Festival and also the launch of Enyan Abaasa Akwambo 2022 Festival Friday, June 17, Osagyefo Kwame Akonu X appealed to all Ghanaians to pay their taxes for the development of the nation.

He said, every Ghanaian needs development in his or her Community and this can only be achieved through tax paying.

He also advised natives from Enyan Abaasa Community to always pay Community dues for the development of the Community.

According to him, it is their dues that they use to develop the community and to beutify it.

Osagyefo Kwame Akonu X said the dues is only fifty pesewas which every native from Enyan Abaasa should contribute for the development of the Community.

He also called for Unity among the people of Enyan Abaasa Community.

According to him,this year’s 2022 Annual Akwambo Festival which will be celebrated from September 5 – 11 will be unique since the community has been hungry to celebrate the Festival as the COVID 19 Pandamic caused a suspension of the festival.

He then appealed to all natives from Enyan Abaasa who have traveled outside the town to come back home in their numbers during the Festival time for the development of the Community.

Meanwhile, Chairman for Enyan Abaasa Youth group in Greater Accra Mr. Kojo Ammisah in an interview said their main motive is to get a modern durbar ground for the community.

He also appealed to the Member of Parliament for Ajumako Enyan Essiam Constituency Ato Forson, the District Chief Executive Emmanuel Ransford Kwesi Nyarkoh and all natives of Enyan Abaasa to join hands to build the Enyan Abaasa Community.