The Nneka Youth Foundation, a Non-Governmental Organisation in partnership with the Village Bicycle Project has distributed over 100 bicycles to school children in the Afadjato South District of the Volta region.

The distribution which was done on Sunday forms part of a project aimed at facilitating the movement of the pupils to and fro their various schools.

Country Director of Village Bicycle Project, Ebenezer Somiah told Starr News that “the ultimate goal is to reduce the transportation challenges the pupils go through on daily basis to and fro school.”

“We are here in Ghana to support school children to improve upon educational outcomes and also to health and agriculture workers, especially those in rural communities where means of transport is very challenging due to bad roads among others as our own form of contribution to the economic development of the country,” he added.

He revealed that the organisation which has been in existence for the past 20-years source bicycle donations from donors in Europe and other parts of the world and bring them to Ghana where the bicycles are refurbished to ensure they are road worthy and subsequently distributed to the school children. 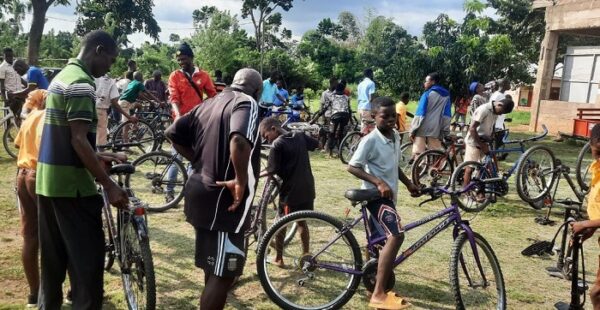 Founder of the Nneka Youth Foundation, Cecilia Fiaka said, “underserved communities are where we have concentrated to work to bring transformation and change and to inspire these children that they can come from here and still make it in life.”

“…through our work in these communities we realised that school children in some of these communities walk 3 or 2 kilometres daily to school and back to their homes and by the time they get to school, they’re exhausted and only end up sleeping in class without concentrating. So the bicycle project is to alleviate their plight,” she added.

The project according to the Founder, Cecilia Fiaka began in 2014 with 60 school children from some rural communities in the Afadjato South District benefiting in that year with this year’s being the third time such a project has been implemented.

Kedza Joseph, a pupil who also benefited from the project said, “I use a motorbike to school and I pay GHS10 daily but now that I have a bike, I will save that money for my feeding.”

Another beneficiary, Taga Melody said, “I walk about 1hr/30mins to school every day and by the time I get to school, I am tired and not able to concentrate but I’m glad I got tsis bike now which I believe will facilitate my journey and make it easy and faster.”

The Nneka Youth Foundation since its establishment some 10 years ago has impacted many lives, especially in the areas of youth development and education.

The Foundation’s works have transcended the boundaries of the Afadjato South District where it operates with projects in other parts of Volta and the Oti regions.